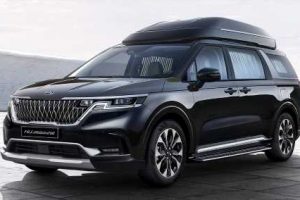 Following the debut of the fourth-generation Kia Carnival in Korea back in August, the carmaker has now released a new, high-roofed variant of the MPV called the Hi Limousine. Prices start from 60.66 million won (RM224,797) for the nine-seat version, but what you really want is the seven-seat option that costs more at 62.71 million won (RM232,394) – more on that later.

At first glance, the Hi Limousine appears to be a regular Carnival with a roof box strapped on to improve cargo capacity, but that’s not the case. In fact, it’s actually part of the vehicle’s body and serves to provide more headroom on the inside compared to the standard model, 291 mm to be precise.

There are other exterior changes too, including a front bumper guard, skid plates, side steps, a dedicated emblem on the tailgate, and a third brake light on the heightened roof structure, which would be under the roof-mounted spoiler on the normal-roofed Carnival. As mentioned at the start, the seven-seat version is the one to have, as passengers will enjoy a lounge-like cabin that features second-row captain’s chairs with leg rests – the third-row is a regular bench that accommodates three people. Meanwhile, the cheaper, nine-seat version has seats arranged following a 2-2-2-3 layout.

This trend continues with the engine, as the variant can only be had with a Smartstream 3.5 litre V6 petrol engine rated at 294 PS (290 hp) and 355 Nm of torque. The GDI mill is paired with an eight-speed automatic transmission as standard.