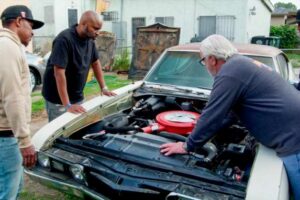 Kevin Hart’s Muscle Car Crew has come a long way from the beginning of their endeavors to start a serious car club. The Plastic Cup Boyz—members of the crew—have been exploring the Los Angeles car scene and learning about every aspect of car culture imaginable, and the fruits of those labors are beginning to ripen. Before Kevin Hart’s Muscle Car Crew can make their grand debut, however, they need to wrap up the builds on all their project cars.

It’s not just the project cars that need finishing, though. Each of the Plastic Cup Boyz was assigned a task to help start the club when Kevin Hart’s Muscle Car Crew was formed. Joey Wells, in charge of clubhouse décor, is still hard at work.

Related: Kevin Hart’s Muscle Car Crew is almost ready to call themselves a fully fledged car club. Did you miss any part of the journey? Relive all the lessons and laughs, only on the MotorTrend App. Sign up today for a free trial!

Will “Spank” Horton—in charge of events—has been given a reprieve on the dismal showing of the club’s first car meet, but he’s been challenged with putting on a better show next time. Ron “Boss” Everline is hard at work organizing a photo shoot for the club’s social media campaigns and debut, and Harry Ratchford is finalizing the logo design for the crew.

Catching Up with the Plastic Cup Boyz’s Project Cars

Previously, Joey Wells told us that he eventually wants four classic cars to go with his 1956 Volkswagen Beetle, assuming his wife allows it. The 1968 Oldsmobile Cutlass has always been near and dear to his heart because his beloved Great Aunt Doe Doe and Uncle William purchased one brand new in 1968 and never got rid of it. They impeccably maintained their Cutlass until their passing in 2005, and since then Joey has wanted a ’68 Cutty of his own. But what about those other two classics?

“If given permission, I’m going to get a ’68 Chevelle. Watching the guys with their Chevelles made me want to join the Chevelle club. And with the fourth car, I’m going to stay in the Volkswagen world and get a ’68 VW Bus. Hello, Venice Beach!” Apparently, Joey’s visit to Dockweiler Beach for the WestSide Volkswagen Club meet reaffirmed his love of vintage Volkswagens, too.

Joey isn’t the only member of the Plastic Cup Boyz considering another build. If you remember, Harry and John Clausell have already purchased new project cars. They, like Kevin, already had fully built cars when the Plastic Cup Boyz decided to form a real car club, not just hang out as friends in their awesome cars. The Plastic Cup Boyz also need to choose a president of the club, a role they were going to assign based on who used the proposed $20,000 build budgets the best.

Harry purchased a very clean and low-mileage 1966 Chevy II Nova, and it’s the perfect blank canvas for his next project car. As a proud Navy veteran, Harry told us he wants to pay tribute to his brothers and sisters in the service, and have some fun while he’s at it. “The Nova will be a car that I might autocross, so it will definitely be a driver. I’m super excited about the Armed Forces (Navy) theme,” Harry says.

John Clausell is going for a more relaxed approach with his 1966 Chevrolet Chevelle SS396 Convertible. Unlike his 1968 Camaro SS427, with its supercharged LS3 hiding menacingly under the cowl hood, the convertible SS396 Chevelle is all about cruising comfortably in style. According to John, your hardtop car is for driving and your convertible is for relaxing and looking good.

Spank’s 1969 SS396 Chevelle is sitting pretty (still in its original green paint and not a wrap—yet) with its new 525hp LS under the hood. Joey’s ’56 Beetle can actually keep up with the other guys, thanks to the Powerhaus engine swap.

But Kevin Hart got some bad news when he paid a visit to his builder, Jason Pecikonis, owner of Timeless Kustoms. Kevin has five cars at Timeless Kustoms, and none of them are done—not even Kevin’s 1969 Camaro restomod (named “Bad News”) that’s just waiting on axleshafts. Good thing he has other cars ready for the crew’s public debut.

Joey Wells Tells Us About Finishing the Clubhouse

Setting up a car crew’s clubhouse isn’t as easy as throwing some random car parts and chairs in a shed and calling it a day. We asked Joey why getting the clubhouse just right was so important, and his answer wasn’t surprising. “Everyone’s work week is extremely stressful. The clubhouse gives us that place to reenergize—fellowship and just talk cars. “

When Joey was first tasked with setting up the clubhouse the guys will call home, the crew said he wasn’t allowed to rely on his wife’s keen eye for interior decorating. That’s where the Plastic Cup Boyz trip to visit Mister Cartoon and Pegasus and Professionals car clubs is paying dividends.

What they saw at Cartoon’s place gave Joey all the inspiration he needed. “Cartoon definitely influenced me. Just seeing how they had made their clubhouse a home away from home was so important…having a place where the fellas can get away, be comfortable, and more importantly relax,” Joey told us.