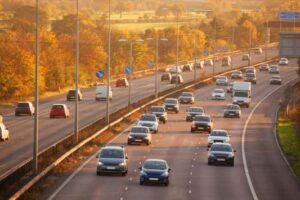 Just Stop Oil protestors are continuing to block the M25, in spite of a fresh injunction prohibiting them from doing so.

The climate change activists have been causing disruption around the UK over the past several months by illegally blocking roads. Their latest target has been London's orbital motorway, the M25.

In effort to curb the severe disruption resulting from this, National Highways secured a High Court injunction prohibiting protestors from obstructing the M25. Anyone caught doing so can now be held in contempt of court, the penalties for which can include imprisonment, an unlimited fine and the seizure of assets.

Nevertheless, the group is continuing to hold up traffic on the busy motorway, with those affected taking to social media to vent their frustration. One person tweeted that their surgeon friend was caught up in the chaos and had to cancel a clinic they were due to hold for cancer patients as a result.

Questions have been raised about how proactive the police have been in dealing with the issue. It was reported that the police were given advanced notice of the M25 blockage, but failed to warn the public. Police are also reportedly not checking that protestors are actually glued to the road before deciding to wait for specialist debonding teams to remove them.

Footage has emerged online of several instances where frustrated drivers have taken it upon themselves to drag protestors out of the road, although the police have urged the public not to get involved.

Just Stop Oil previously targeted the Dartford Crossing, when two climbers ascended the bridge between Essex and Kent, resulting in the crossing being closed. Cars queued for up to six miles in the traffic chaos.

Roads in and around London have been blocked frequently by the group, with ambulances and fire engines held up. The group has also vandalised a number of buildings, including an Aston Martin dealership.

Looking to ditch your petrol or diesel car for an EV? Check out our list of the best electric cars here…