Home » Car Reviews » JPJeBid – how to bid for your preferred car number plate online, DIY and skip the runner and his markup – paultan.org

JPJeBid – how to bid for your preferred car number plate online, DIY and skip the runner and his markup – paultan.org

Imagine if you can have the exact thing that you want, and pay half or even a just a third of the market price for it, you’d go some length to get it, right? A detour during your holiday to visit a watch store or football club store, or even a drive to the premium outlets for that handbag, you’d do it. So would I.

That’s almost the case when it comes to securing the ideal number plate for your new car. Almost, because unlike the examples above, you don’t even have to get off your couch. Number plate bidding is no longer the preserve of runners with JPJ eBid, the online bidding platform that everyone can participate in.

JPJ eBid kicked off in April 2019 in pilot project form, and the first number plate series to go online was Putrajaya’s FC. After FC, JPJ eBid was used by the department for KL plates starting with the VDN series in June 2019. It’s now nationwide. 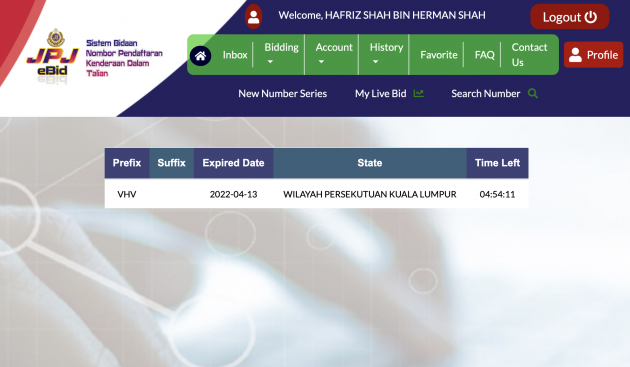 So, how to bid for a number on JPJ eBid? Hafriz and myself have successfully bought plates using the platform, so join us as we take you through the steps. The screenshots you see here are of Hafriz’s actual bidding process – you’ll see a failed bid and a winning bid.

Once your account is up and running, log in (user ID is your IC number or company registration number) and you will be able to view the number plate series that is currently available for bidding. These numbers are from all states; with an online system, a KL resident can have a Perlis number plate, vice versa. 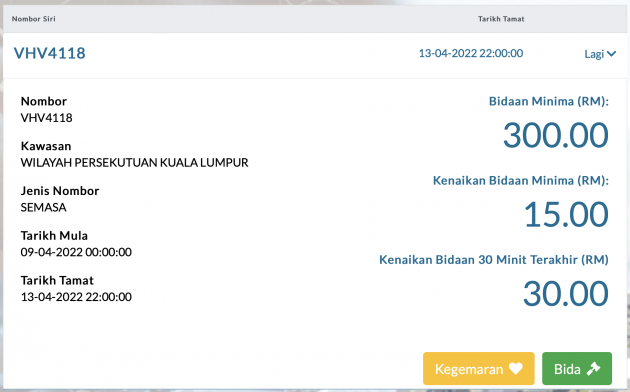 There are no limits to the amount of bids you can submit, and if there are two or three concurrent series open for bidding, you can enter all of them if you wish. Note that there will be a non-refundable RM10 service charge for each number you’re bidding – think of this as a cover charge. Once in, you can bid as many times as you want.

Example. Earlier this month, both VHW and JVG series were open for bidding at JPJ eBid at the same time. I want to try for the number 25 and I enter both auctions. I pay RM10 for each “room” and a total of RM20. I can then bid to my heart’s content for VWH 25 and JVG 25. Win or lose, the RM20 is theirs.

While you can bid on any amount of numbers you wish, each individual can only win up to three numbers per series, and each company up to five numbers per series. Presumably, this limit is to prevent number plate resellers and businesses from dominating the auction, giving privateers such as you and me a shot at it.

One frequent question about JPJ eBid is “how to pay”. Of course, you’ll need a credit or debit card, but it must be a Malaysian-issued card. The RM10 “entrance fee” is a straightforward charge to the card, while payments for your bids are are pre-authorisation of full bid amounts, for each bid. An example of a pre-auth transaction is when you pay for hotel deposit during check-in – think of it as them holding your money, as opposed to taking it for good.

When you increase your bid, another pre-auth transaction (of the top up amount) will be made. If you win the bid, all the transactions (initial bid plus all the top ups) will be charged to your card. If you don’t, the transactions will be reversed and you won’t be seeing them in your statement. Note that the reversal is not immediate and it may take a few days to clear.

So, how much? There’s no limit to how high a bid can go, but there’s a minimum price for each category of number. JPJ divides numbers into four categories, which are roughly translated as Golden (Nombor Bernilai Utama), Attractive (Nombor Menarik), Popular (erm, Popular) and Regular (Biasa).

For each bid you make, you will get a confirmation notice in your JPJ eBid website/app inbox. Don’t focus on this though, because it will take your eyes off the ball, so to speak. The final minutes before the bell rings are intense. While the JPJ eBid platform gives everyone an opportunity to buy direct, getting your preferred number still needs some dedication, especially if it’s a sought after one. This is not for those who aren’t proactive; unless you’re going to gazump everyone with a sum that’s above the norm, you can’t just put in a bid in your own time and sail through it. There’s some monitoring and fighting to be done.

Typically, the bidding period is over five days, but the “auction room” is pretty quiet all the way until the final hours before the cut off time on the last day, which is usually at 10pm.

You can put in your bid early, just to get a feel of how it’s done. If this bid has been beaten, you will be notified via the website/app inbox. There’s no email notification, unfortunately, so you will have to log on to monitor your current position. The top three current bids are displayed on your dashboard, so you know how much you need to top up to beat them. It’s all very straightforward and orderly, but that’s before the war starts. In the final 30 minutes, as the bids come pouring in, there’s a chance that the site will slow or even hang, and the leaderboard update might not be able to catch up.

For a higher chance of success, you can put in a higher bid that you’re confident won’t be beaten, but this would also mean you won’t be getting the “best value”. Can’t have it all, right?

Ultimately, it depends on how much you want the number, and there’s also the element of chance, whether or not you have good access to the system/payment in the dying minutes. The system isn’t perfect – email notifications would help, and the last minute “blackouts” on the site can be frustrating when you’re in a race.

Bear in mind that if it’s a popular number, you’re not the only person eyeing it, so enter the race, but be prepared to lose. Also, while the cap on the number of winning numbers and the non-transferable clause gives us a chance, we’re still going up against resellers with plenty of knowledge of the inner workings. Maybe they got jalan, maybe not, but their inventory is massive.

Anyway, win or lose, you will get an email from JPJ the following day. If your letter starts with sukacita, congratulations, you are now the owner of the number plate you want.

If you tak puas hati (OK, out of curiosity then), you can check the winning bid amount. However, checking is only for the numbers that you have bid on. You can use this winning amount as a personal reference or rough gauge for the particular type of number, for future use, although it’s not exact science and there are many variables. Hafriz likes his 3118, and of the three series he participated in, the winning bids were RM330 (him), RM560 and RM1,100. 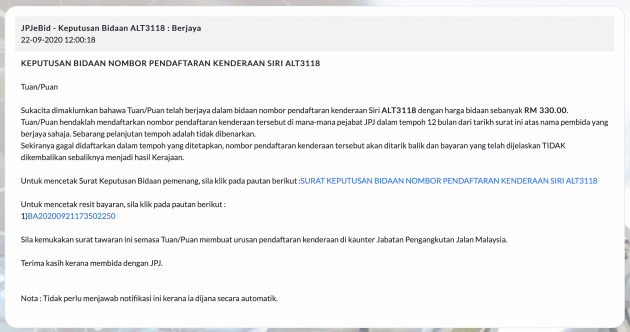 You won’t know if you have won till the following day, when an email will either have gagal in the title or starts with sukacita dimaklumkan. Attached is an official letter that crowns you the right to the number you love, which needs to be registered on a vehicle in 12 months. If there’s no registration within the year, the number is withdrawn and there will be no refunds.

Generally, numbers are not transferable, but JPJ makes an exception for immediate family members – father, mother, husband, wife, siblings and children. If you want to transfer the number to a family member, you’ll need to furnish proof of your relationship when registering the vehicle. This can be a birth or marriage certificate. No transfer is allowed for companies, societies and cooperations.

If no transfers are allowed, then why are there so many number plate sellers around? One method is for them to register the tendered number on a new motorcycle, typically the cheapest kapchai available. Purchase the plate from them and they will perform a (legal) plate interchange between the registered bike and your unregistered new/recond car. The plate you bought from the reseller will be transferred to your car from their bike, which will then receive a new running number. 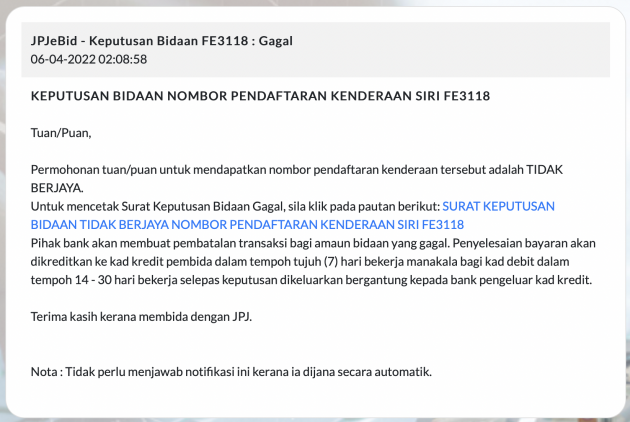 If you’re buying a new car, just inform the sales advisor that you already have a number plate waiting and hand over your winning bid letter – they will do the rest.

That’s it. Not too difficult, right? We hope that this simplified guide helps. If we missed anything, ask us in the comments below and we’ll try our best to answer. Good luck and happy bidding!