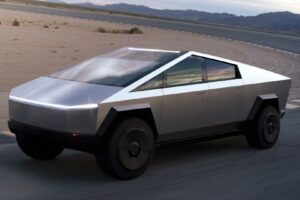 Investment guru says the Cybertruck is an “eyesore,” recommends people to buy an F-150 Lightning instead.

In the entire history of the automobile, few cars have been as polarizing as the Tesla Cybertruck, and the electric pickup’s styling continues to make waves almost two years after its unveiling.

The latest person to take a jab at the Cybertruck’s looks is former hedge fund manager turned TV personality Jim Cramer who says that because of the way it looks, the electric pickup will be Musk’s “first disaster.”

In an interview on Wall Street on Monday, Cramer was asked if he saw the Tesla Bot and he immediately steered the discussion away from the humanoid robot to the Cybertruck.

“Yeah, I did, but I also saw the actual pickup truck. Go buy an F-150. This thing is not just ugly; you got to love Tesla to get this thing … I still like Tesla … but I think that this pickup truck will be a disaster. His first disaster. I mean, I saw one.”

Before bursting into laughter, Cramer went on to describe the Cybertruck as an “eyesore” and said people are going to have a shock seeing them on the road.

Now, everyone is entitled to an opinion, and it’s clear that there are many who dislike the Tesla truck’s futuristic Cyberpunk-inspired design. But saying that it will be a disaster is probably an exaggeration given the potential 1.25 million pre-orders (according to an online reservation tracker created by fans).

Mind you, Cramer is not the only one to voice concerns about the Cybertruck; even Elon Musk expressed doubts about the electric pickup truck’s success.

Last month, Tesla’s CEO tweeted that “there is always some chance that Cybertruck will flop, because it is so unlike anything else,” adding that he doesn’t care and he loves it so much even if others don’t.

Back to Cramer, he also talked about the NHTSA’s probe into Tesla’s Autopilot, describing it as “unfair” and saying that “there are many more accidents from drunk drivers.” The star of CNBC’s  Mad Money commended Tesla for avoiding massive failures with its products, unlike GM and the recent Chevrolet Bolt EV recall fiasco.