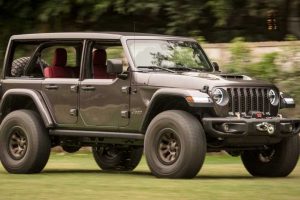 For Jeep fans, it was Christmas in July. Looking to spoil the Ford Bronco’s big reveal a couple months back, Jeep dropped the Wrangler Rubicon 392 Concept stuffed with a 6.4-liter Hemi V-8 from the factory at roughly the same time. Jeep’s people say it’s still “taking feedback” on the concept, and after driving the beast, our feedback is this: Stop talking and start building.

It’s not like we all didn’t know a V-8 Wrangler would be awesome. Companies like AEV have been swapping Mopar V-8s into Jeep Wranglers for decades, and other aftermarket companies and enterprising shade-tree mechanics have been doing it even longer. Hell, even Jeep did it more than 40 years ago, putting a 304-cubic-inch (5.0-liter) AMC V-8 in the pre-Wrangler CJ-7 for five years. Jeep’s refusal to do it again has been chalked up to all sorts of reasons, but “can’t” was never one of them. This company can put a V-8 in anything, and we knew the Hemi would fit under the hood of a the latest JL-series Wrangler.

If you’ve been fortunate enough to own or at least drive a V-8 Wrangler, you know the rig can handle the muscle. We drove AEV’s JK350 with a 6.4-liter V-8 a few years ago and even paired with the previous-generation Wrangler’s five-speed slushbox automatic, it felt like just what the doctor ordered. It has all the power you need to climb hills, make passes on the freeway, and clamber over obstacles without winding out the engine. It just grunts and goes.

The Wrangler 392 concept is like that, too. Even with the newer, infinitely better eight-speed automatic transmission bolted to it, the 392 doesn’t leap off the line like a Hellcat. Instead, it starts with a lurch not unlike a diesel Wrangler. This isn’t much of a surprise, given the 392 concept’s detuned 6.4-liter V-8 makes 450 lb-ft of torque, eight more than the 3.0-liter turbocharged EcoDiesel V-6. More than that, Jeep fitted the diesel’s 3.73:1 rear axle to the 392 instead of the gas-powered Wrangler Rubicon’s 4.10:1 rear end, as the additional low-end torque means you don’t need a short rear end to get going. The less-aggressive gearing makes it easier to drive around town and less jumpy on the trail.

What the diesel Wrangler doesn’t have, though, is 450 horsepower. It has 260, and while the eight-speed transmission does its best to surf the diesel’s torque, horsepower makes speed and the diesel Wrangler needs 7.5 seconds to hit 60 mph. The V-8 has all the power you need and it doesn’t fall off at high rpm, which means the 392-powered Hemi rig will hit 60 mph in less than five seconds. That is, scientifically speaking, completely nuts. After that diesel-like lurch off the line, the Hemi’s horsepower starts to take over and the Wrangler V-8 really starts to rip. There’s a brief moment right after it gets off the line where you expect the power to slack off, but instead the 392 rears back and you take off. Even with big, heavy 37-inch tires mounted, this thing hustles and it’s not long before you start to wonder if Wranglers should really be this fast. Then you bury that un-American thought along with the throttle.

How Does the Wrangler Rubicon 392 Drive? Not Bad for a Concept

Partly fueling your brief thoughts of self preservation is that the Rubicon 392 is not only on taller tires but also fitted with a 2.0-inch lift out of the Jeep parts catalog. The kit features taller springs, Fox shocks, and new trailing arms to maintain the Jeep’s suspension geometry, thereby allowing the Wrangler to handle as it would from the factory. But there’s no hiding the fact you’ve gained nearly 2.5 inches of ground clearance and likely raised the center of gravity nearly as much. Tall vehicles simply don’t handle as well, and such things get exciting when you drive them fast—and this thing is fast. So fast, in fact, that above 40 mph the stability control kicks in and restricts power if you put your foot down with the steering wheel turned even slightly off center. Hey, it’s still a concept.

It’s also loud. Dual-mode exhausts are common fare for sports cars and high-performance SUVs, but less common on factory off-roaders. Honestly, the 2.0-liter turbocharged four-cylinder and 3.6-liter V-6 currently offered in the Wrangler wouldn’t benefit from louder exhaust systems. A Hemi-powered Jeep, though, most definitely does. For the Rubicon 392 concept, Jeep wired the cut-off valve to one of the auxiliary buttons on the dash, and it’s the first button you should push when you get in. If you’re going to turn your Wrangler into a four-wheel-drive convertible muscle car, it ought to sound like one, too, the better to fulfill the below fantasy.

Picture this: A slow-moving car that’s been hogging the left lane has finally moved out of the way. You floor it, the exhaust opens, and the rolling roadblock watches a Wrangler go screaming past, headlights pointed at the sky, engine screaming like a Challenger, driver hanging onto the steering wheel for dear life. May we all live that dream.

But before we can, Jeep has a little work left to do. After a brief, 15-minute drive and only one burnout, the floorboards and transmission tunnel began to get hot from the dual exhaust system tucked up under there. The steering, probably due mostly to the lift and the 37s, is heavy, gluey, and doesn’t like to stay on center (the latter a common Wrangler issue made worse here). There’s that stability-control issue—in fairness, it probably hasn’t been reprogrammed for this engine yet—too. But these are all problems that can be fixed for production.

While we can tell you it rips excellent burnouts, we can’t tell you how it off-roads. Being a hand-built prototype, Jeep isn’t prepared to let us beat it up in the dirt just yet. (Or on the pavement, really, as that burnout wasn’t exactly sanctioned, if we’re being  honest.) Having driven the AEV V-8 Wrangler and the factory built Wrangler EcoDiesel, though, we’re not concerned. Low-end torque is great for off-roading because it lets you climb over obstacles with little throttle input. How the torque gets made is immaterial, but you can bet the V-8 will sound better doing it than any other factory-spec Wrangler.

Should Jeep Build the Rubicon 392? Can You Say ‘No Brainer’?

The only real question here is whether Jeep will pull the trigger on this thing. The business case is a no-brainer. V-8 conversion kits for modern Wranglers start just under $6,000 uninstalled and go up from there, so even if it adds a few grand to the MSRP, customers will be lined up down the block. The bigger issues Jeep will have to face come in the form of the EPA’s Corporate Average Fuel Economy (CAFE) regulations, which penalize automakers for building too many gas-guzzlers of the type parent company Stellantis, formerly FCA, has many of thanks to its addiction to big, giant, glorious V-8s. (During my drive, the 392 Hemi Wrangler was self-reporting a 9.4-mpg fuel-economy average.) There’s also the question of how the physically larger V-8 engine will affect crash testing.

But again, Jeep will sell so many of these things it can afford to pay for any engineering fixes and whatever the CAFE fines will be. The V-8 Wrangler is awesome, and Jeep should build it yesterday.