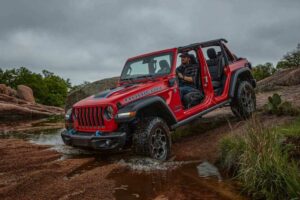 Buyers seem to be flocking to get the new Wrangler plug-in hybrid.

What’s not to like about the Jeep Wrangler 4xe? It is the Wrangler we’ve known and loved for decades, but now with the plug-in hybrid powertrain, it’s greener and more efficient than ever. It also allows for completely silent running, which makes a lot of sense if you’re a nature lover and don’t want to disturb the wildlife, which is what you do in any ICE vehicle.

In fourth place, with 12.8 days on average on dealer lots, the Hyundai Santa Fe Hybrid also placed quite high, while in sixth place we have the Toyota RAV4 Prime with 13.7 days on average. This shows that plug-in high riders are really in demand right now, but at the same time this study suggests that an actual off-roader PHEV is even more appealing than an electrified soft roader like the Hyundai and Toyota (and many other similar vehicles).

The Jeep Wrangler 4xe is powered by a 2-liter turbocharged four-cylinder that together with an electric motor make 375 horsepower and 470 pound-feet of torque. It draws from a 17.3 kWh lithium-ion battery pack and has a claimed EPA electric range of 21 miles and it is currently the most efficient variant of Wrangler that you can buy.