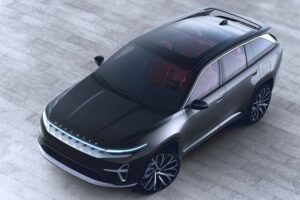 The new, and smallest member of the Jeep Wagoneer family needs a name. It is an electric midsize SUV that is coming in 2024 to round out the Wagoneer family that currently consists of the 2023 Jeep Wagoneer and the 2023 Jeep Grand Wagoneer, both of which are fullsize SUVs and have more massive long-wheelbase versions. Jeep has codenamed the EV the Wagoneer “S” for speed because its 600 horsepower should propel it to 60 mph in 3.5 seconds. The Wagoneer S is a premium midsize SUV—a full size smaller—and will go on sale as a 2025 model to compete against the Land Rover Ranger Rover Sport.

Slightly smaller than todays’ two-row Jeep Grand Cherokee, it has a swoopier look, modern LED-lit face, and a roof line that dives under the rear wing. The electric SUV will have a range of about 400 miles. But it has no name yet.

“We have not decided the name,” Jeep brand CEO Christian Meunier tells MotorTrend in an interview. “We have a few in the basket.”

The global chief said he would like to elicit the help of the Jeep community to choose the name. The plan is to organize a sweepstake on social media. Jeep will chum the waters by throwing out some suggestions and direction. He would not divulge them in advance. The hope is the exercise will spur the creativity of Jeep fans and lead to a name.

Meunier said he would like to settle on a name by the end of the year so there is a moniker in place to begin the reservation process next year. The online contest should launch in the next month. Jeep will need to review the names, produce a shortlist, and check trademarks so exact timing is difficult to pin down.

The Wagoneer name has a lot of heritage and the new SUV is very modern, which makes it hard to know if the name should harken to the past or the future, Meunier says.

Built and Sold in North America

The Wagoneer S will be built in North America, using the STLA Large platform, but the automaker is not saying where yet. Meunier notes there are two new battery plants coming in Kokomo, Indiana, and Windsor, Ontario. Most manufacturing decisions have been made but a few had yet to be finalized. The SUV will be assembled in North America where it will launch first, and then be exported to Europe.

The Wagoneer S is one of four new fully electric Jeeps for North America by the end of 2025. Meunier said the concept is almost final design and essentially production ready so what you see is what you will get.

Also on tap are plug-in versions of the larger members of the Wagoneer family. A Jeep Grand Wagoneer 4xe and Jeep Wagoneer 4xe will hit the market in 2024. Meunier said it has not been determined yet whether they will be designated as 2024 or 2025 model years.

The 7-8-passenger SUVs will have 500 miles of combined range and serve as stopgaps to fully electric versions down the road. The “potential BEV version that might follow” is still a few years out, he says.

Jeep plans to offer electric versions of all its vehicles with the goal of EVs accounting for half of its total sales in North America and all its European sales by 2030.