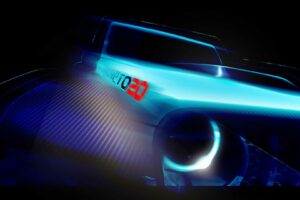 After a modest showing in 2021, it appears Jeep is bringing a legit truckload of concepts to the 2022 Easter Jeep Safari at Moab. With little more than a week until the event, we now have the “Trail Marker 6” teaser that actually previews the seventh concept from Jeep. This one, however, isn’t an all-new creation.

At least we think it isn’t all-new. Last year, the Jeep Wrangler Magneto concept was unveiled as an all-electric off-roader, based on a two-door Rubicon. This new teaser clearly shows Magneto on a white hood, just as we saw before. But now we have the number 20 after it, and in a very short paragraph about the teaser, Jeep mentions pushing “the limits on legendary Jeep 4×4 capability and off-road development even further.” Clearly, there’s something extra happening here. The question is, are we dealing with a modified version of last year’s Magneto concept, or is it another Magneto EV?

Here’s where the plot thickens. We’ve also seen the number 20 before, very recently in fact. An earlier 2022 Easter Jeep Safari teaser showed the hood of a Wrangler Rubicon with 20 in small script. Next year marks the 20th anniversary of the Rubicon trim, and we believe the concept could preview a 20th-anniversary model that will enter production. Could this new Magneto 20 also preview a 20th anniversary trim that might see production for the 2023 model year? Making such an announcement at Moab – where off-road fans can see it in action – could be a smart PR move.

In any event, the Magneto 20 (whatever it ends up being) will be surrounded by a plethora of combustion-powered Jeeps. The teaser campaign opened with a decked-out Gladiator and a Grand Cherokee 4xe hybrid. After that, teaser images have come one at a time and Wranglers are the primary focus. Aside from the aforementioned 20th anniversary Rubicon, we’ve seen a military-themed Wrangler 4xe and an interesting Wrangler / Gladiator mashup. Literally one day before this Magneto teaser we saw another Wrangler in four-door guise wearing a plethora of custom parts.

The 2022 Easter Jeep Safari kicks off on April 9. That means there’s plenty of time for more teasers to appear.