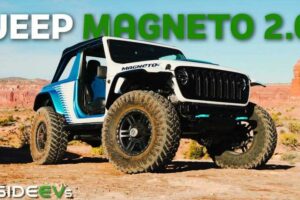 One year ago, I experienced the Jeep Magneto concept car in Moab, Utah. Amazing as it was weird, the Magneto was our first glance at what an all-electric Wrangler may look like when it hits the market. But with rudimentary battery tech and limited power output, Jeep declared that it was far from completion, even as a concept.

I am ecstatic to be back among the stunning Moab red rocks with a much more advanced (and exciting) EV: the Jeep Wrangler Magneto 2.0. With loads more power and off-road upgrades galore, the Magneto 2.0 brings us closer to the ultimate EV Wrangler we’re all hoping to see on these very trails in the future.

I took the updated Magneto concept on a short drive and talked with the head of Jeep brand for North America, Jim Morrison, about the company’s EV efforts. To see the full interview and driving footage, check out the video embedded above. 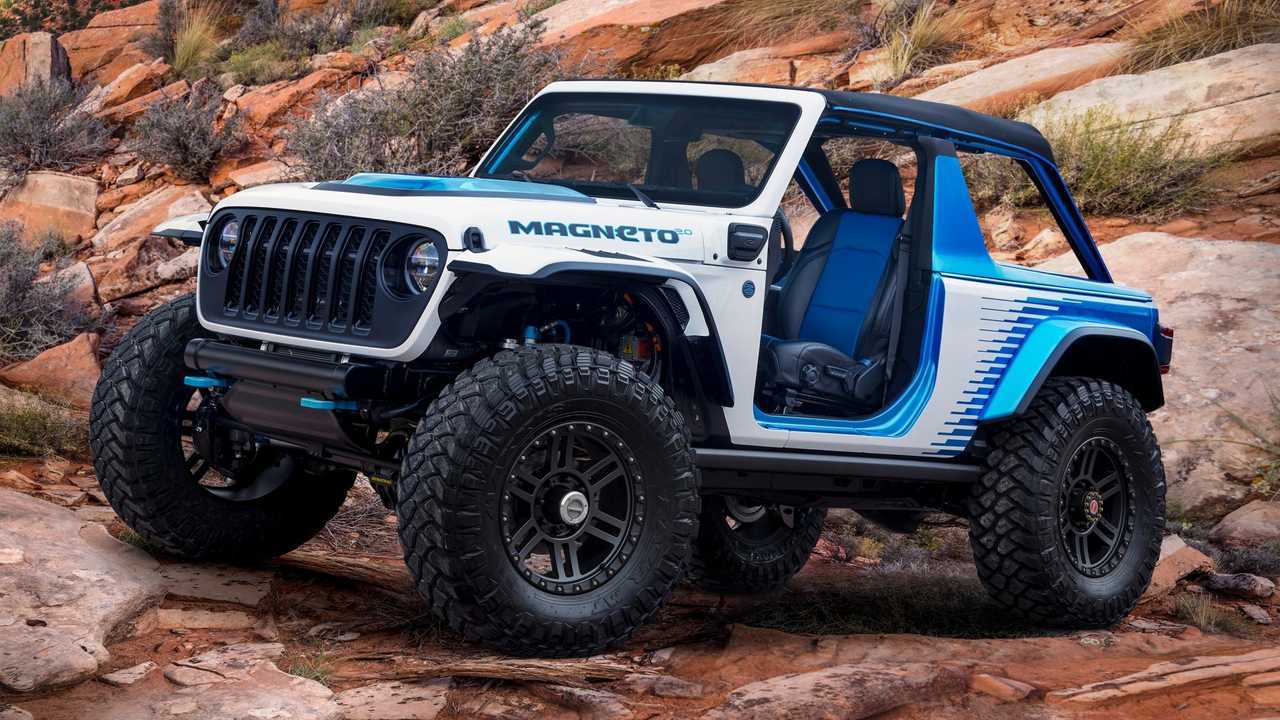 It would be rude to tease the power improvement and not deliver on that right away. Way up from the first concept’s 285 horsepower, Magneto 2.0 makes a thunderous 625 hp and 825 lb-ft from a single front-mounted, custom-built electric motor. This time there’s a 70-kilowatt-hour battery pack, comprised of four different cells that are spread out for better weight distribution, running on 800-volt architecture.

Taking on all of that juice is a six-speed manual transmission sourced from a Charger Hellcat with a dropped first gear ratio from 5.13 to 3.36. Jeep installed the Wangler Rubicon’s Rock-Trac transfer case to give the Magneto optimal torque at all four wheels, along with solid Dana front and rear axles and massive King coilover shocks.

The Magneto 2.0’s wheelbase is 12 inches longer than the standard two-door JL, and it rolls on 40-inch rubber. Even without the monstrous eclectic torque on offer, this is already an extremely capable Jeep just on hardware alone. But as I soon learned, the electricity running through it only serves to improve its abilities. 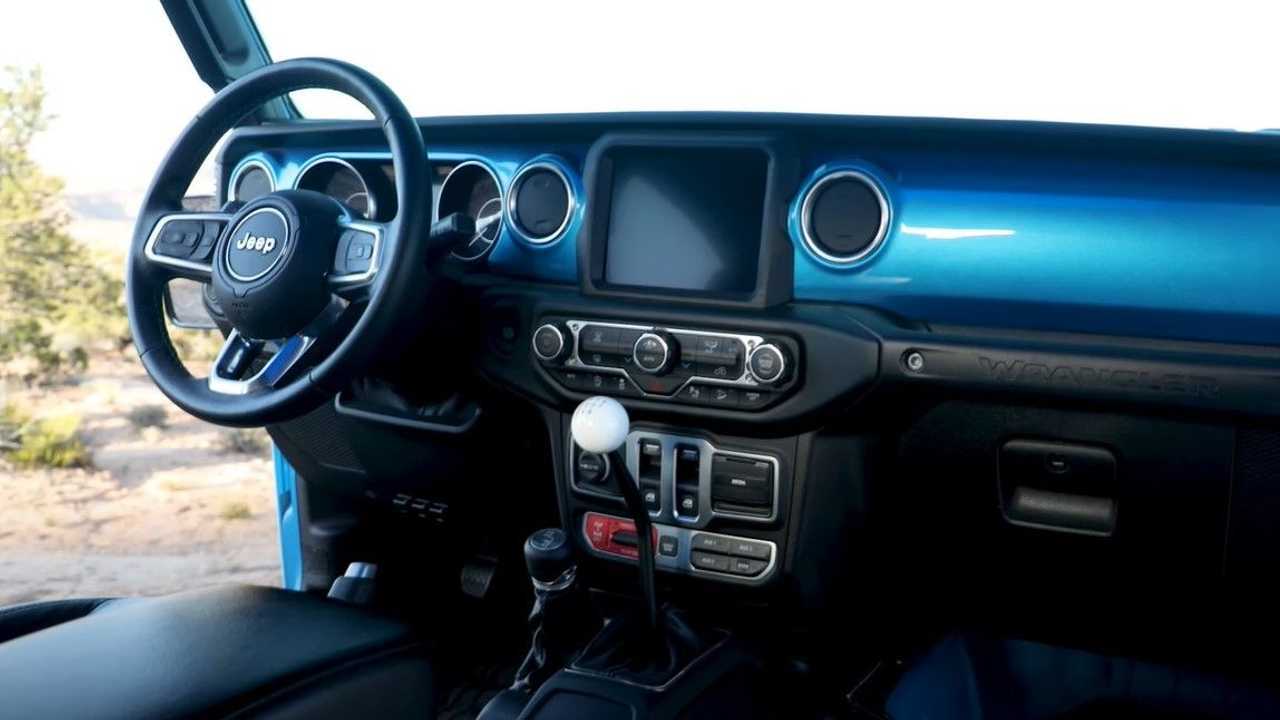 Low And Slow, Over The Rocks We Go

With Jeep boss and fellow off-road enthusiast Jim Morrison sitting beside me, I threw the car into first gear and set off on the rock-covered trail. While Jeep confirmed that the Magneto is indeed capable of lighting up its rather large tires, today’s experience would be all about low-end torque and negotiating tricky rock formations.

With no doors or roof, the Magento’s cabin is exposed to everything surrounding it, giving you plenty of RC car–like whirring from the front axle. Apply more throttle and the noise becomes louder. This is one feature, among many others, that I do not expect to make a production version.

On that note, neither will the six-speed manual transmission, which is an admittedly strange addition to an EV anyway. The clutch works only to move the shift knob between gears, otherwise, it doesn’t serve much of a purpose. And with so much available torque, you could feasibly start the Magneto in any gear to get it off the line, too. While the manual is a fun experiment in a prototype car, the likely replacement will be a one- or two-speed automatic when this car goes on sale. 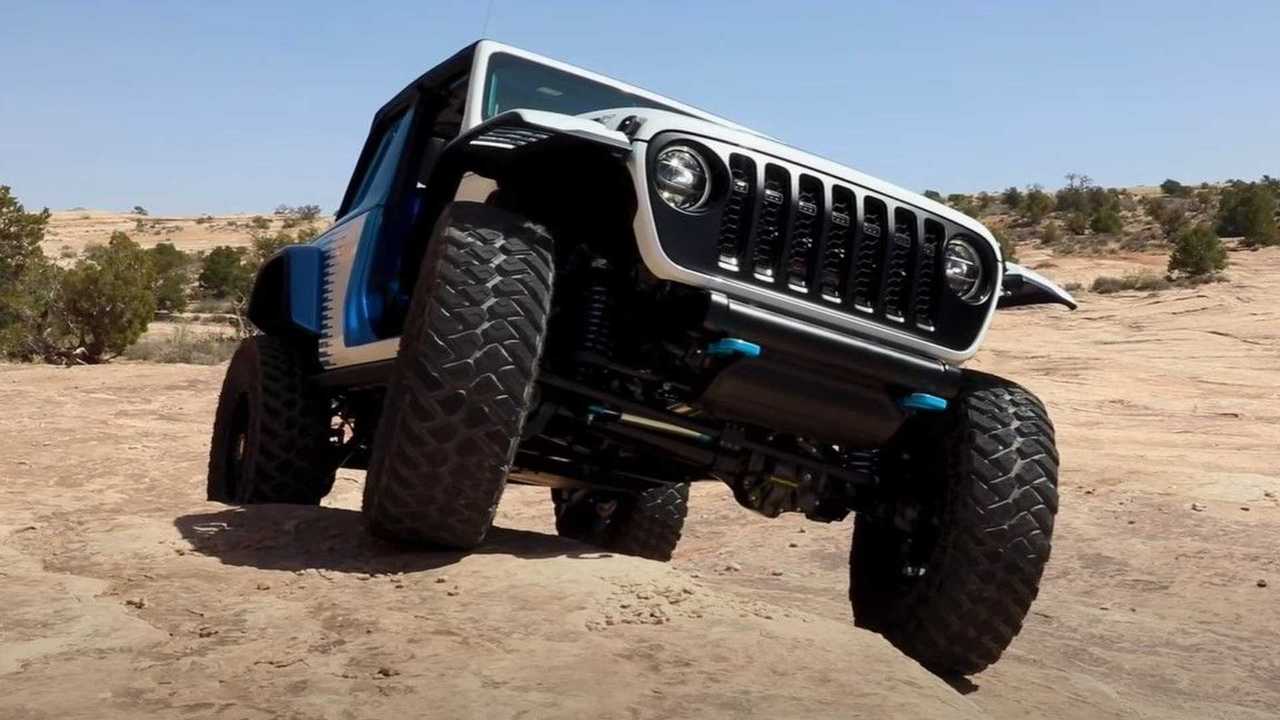 What will be production-bound, however, is the Magneto’s raw appetite for off-roading. Morrison admitted that a 40-inch tire package is probably out of the question, but that any electric Wrangler would have to solider through the toughest terrain, just like the 4xe plug-in. That means bits like the solid axles and transfer case are almost sure bets for the future. With competitors like the R1T and Hummer EV in the space now, Jeep is keenly aware that it needs a Wrangler to take them on – and go even further – off-road.

Without taking the Magneto out of low-range, it was impossible to feel out the powetrain’s full potential. The obvious takeaway was just how finessed electric torque is when crawling at low speed. Having driven a V8-powered Wrangler just minutes before the Magneto, the difference in smoothness between the two was night and day.

I felt similarly about Magneto’s brake regeneration system. While this has obvious uses on public roads, out in the desert its primary role was to slow the Jeep down when descending. Gas-powered SUVs have had hill-descent control for years now, but the Magento’s brake regen worked better than any of those that I’ve tested. And with the added benefit of recouping range in the wild, it’s a true win-win scenario. 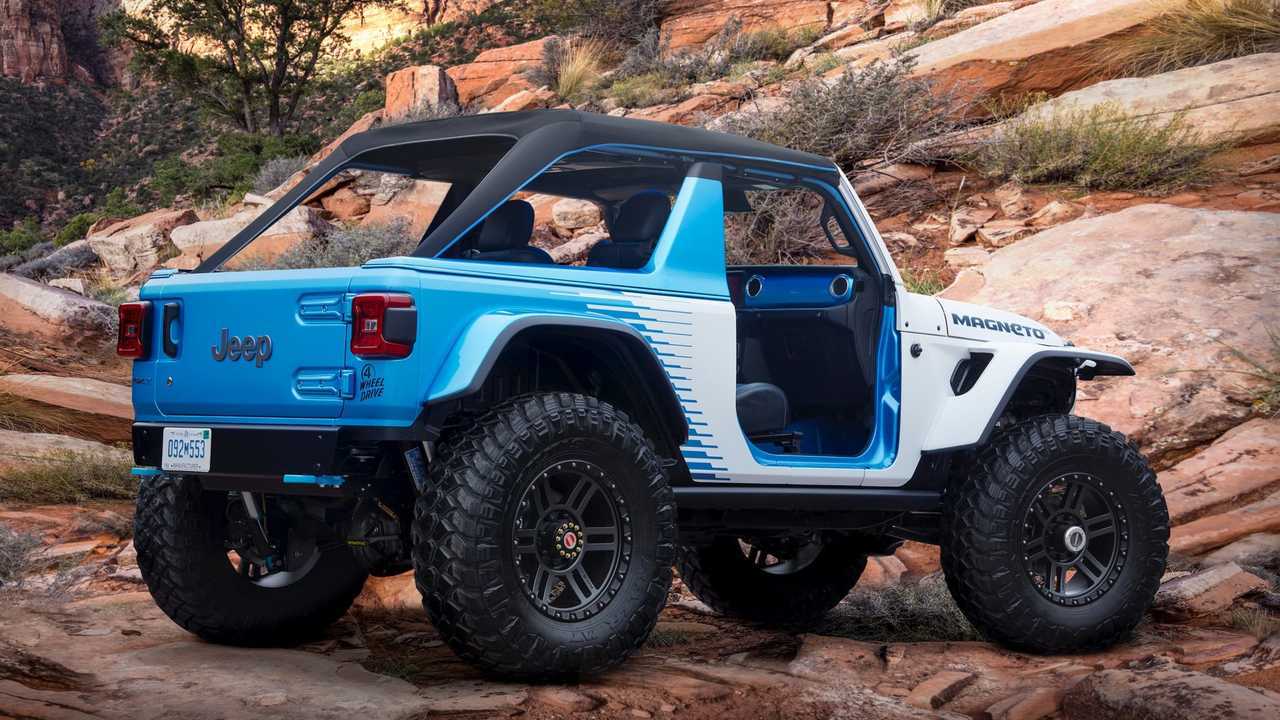 It’s no secret that an electric Wrangler is coming and that it will be pretty dramatically different from both versions of the Magneto concept I’ve driven. Some may look at this concept car as a silly powertrain swap with some hardware upgrades, but the Magneto is a genuine mobile laboratory for Jeep engineers. They’re driving through Moab, just like I did, noting what works and what doesn’t.

So much about the Magneto still doesn’t make sense as an electric car. A manual transmission, battery cells stack high up under the hood, monster-truck tires… the list goes on. But this concept’s real job is to evangelize electric off-roading to the Jeep masses and reinforce that this is the future for the brand. If they end up building something with even half of the Magneto’s charm, a happy future it will be. 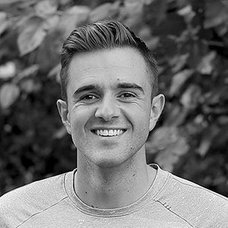