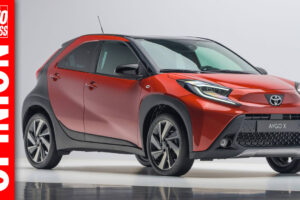 John McIlroy thinks we should celebrate cars like the Toyota Aygo X, while firms can still afford to make them

We're big fans of small cars here at Auto Express. They’re large enough for the majority of use cases, they’re generally more economical and they’re often among the cheapest new cars you can get onto your driveway. Small wonder that manufacturers call them “access points” to their wider ranges.

That’s not as true today as it was five years ago, mind. Ever-tightening emissions rules and the constant push for more safety kit have priced many brands out of the city car market altogether. Vauxhall, Ford and Renault don’t sell cars smaller than superminis, for example; Citroen and Peugeot are about to go the same way.

So it’s heartening to see Toyota trying something a bit different with its new Aygo X – not just by giving it a funky new look that makes it the first baby crossover of its type, but also through its decision to stick with conventional petrol power.

What’s really being played out here – some brands axing their city cars, and others sticking with the genre – is a game of cat and mouse on fleet CO2 emissions, and the potential penalties for missing targets. It’s no coincidence that companies with strong, well established hybrid and/or pure-electric programmes are more ready to “take a hit” on cheaper models, which are tougher to make clean while still making a profit.

Hyundai and Kia, both big EV players, can afford to sell city cars with regular power. Toyota, which has “self-charging” hybrids across much of its regular range, thinks it can do the same. How long that remains the case will probably be down to European Union rules on emissions, more than it will the tastes of consumers.

For thousands of buyers, city cars are the best, maybe even the only, way into a new car. So for as long as they can still be bought for even a little less than superminis, we should celebrate the Aygo X and its rivals. And enjoy their shrink-wrapped mix of fun, style and petrol power.

Check out the best city cars to buy right now…