Italy’s BEV Market Down In February 2022: Waiting For New Incentives 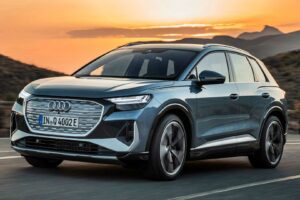 As Europe sets sail for much more ambitious growth for electric vehicles, all is not well in the continent’s fourth-largest car market, Italy. While other major European auto markets continued posting steep increases in EV adoption in February, the Bel Paese almost seemed to be grinding to a halt. Why is that?

Editor’s Note: This article was originally published on opportunity:energy.

As official monthly figures from Unrae show, February was yet another month of worrying losses for car sales. In a similar fashion to January sales figures, as well as those of previous recent months, overall car registrations in Italy declined by over 22% Year-On-Year (YoY), with a total of around 112,000 registrations compared to over 144,000 a year ago.

Petrol and diesel powertrains declined to 26.4% and 22.3% market share respectively (from 32.8% and 25.1%), a relatively modest decrease in share, while absolute registration numbers for both engine types suffered YoY declines near or over a third. Traditional plugless hybrids increased their market share to 34.2% (up from 28.8% twelve months ago), while also declining in absolute numbers by 7.5%, a sign of the worsening conditions of the Italian auto market. 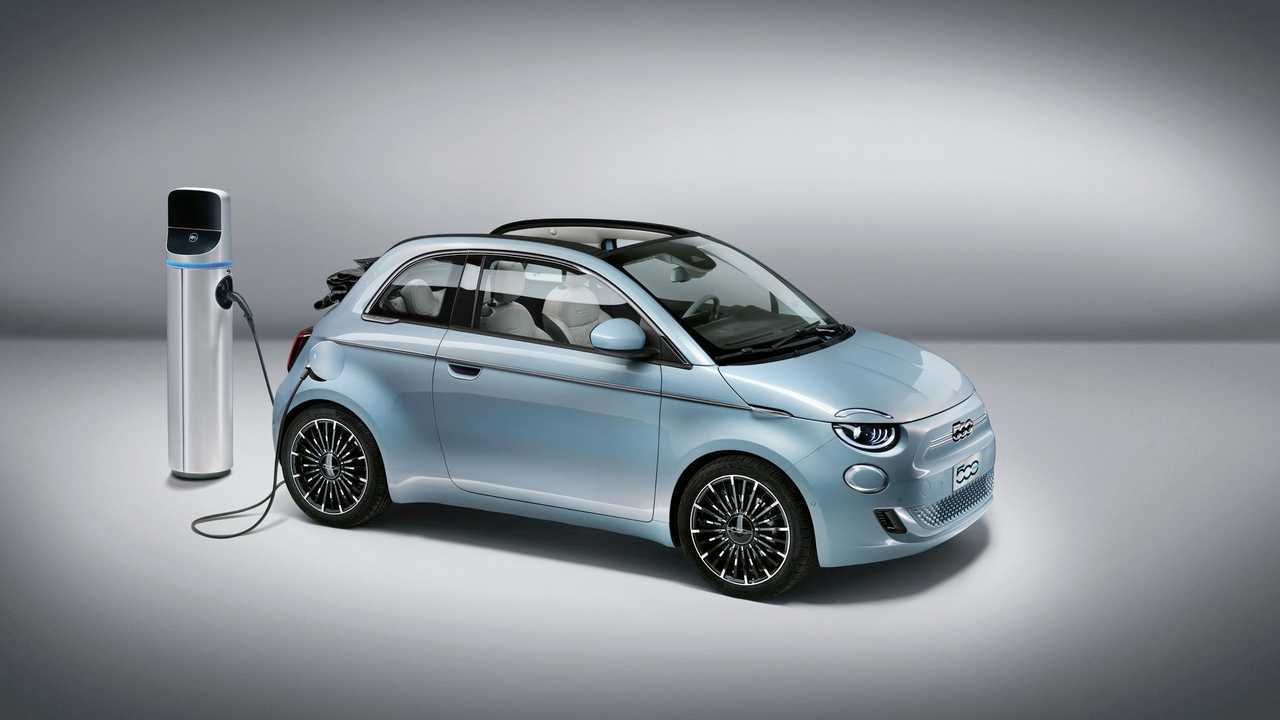 Full electric vehicles also showed mixed signs, as a total of 3,175 units were registered, for a 2.8% market share. While this meant a relative increase in weight compared to last year’s balance (2.4% share in February 2021), it also marked a more than 8% YoY decrease from 3,460 registrations a year ago, as well as the lowest absolute sales figure since October 2020.

This is the first time in years that we witness a decline in YoY monthly sales of full electric cars (with the notable exception of April 2020, when complete lockdowns froze the country). The reason is quite simple: new incentives are being discussed by the Italian government, following the end of the original fiscal package last December and the market deterioration that immediately ensued.

They have not however been confirmed yet, and this is inevitably causing customers to wait for the new incentives before they finalise a BEV purchase. The sooner the government will provide clarity (and funds), the quicker the full-electric car market will spring back to its usual pace of growth.

Plug-in hybrids followed a different path than all other powertrains this month, going against the current. With 5,473 registrations, PHEVs made up 4.9% of the market, up over 11% from last year’s levels, when they stopped at 3.4% share. A brilliant result for this transitional technology, that seems clearly favoured by Italian consumers, and surely by car dealers. Their good performance allowed the combined market share of all plug-in powertrains to reach 7.7%, a rather underwhelming result but an improvement nonetheless over the 5.8% achieved in February 2021.

In such a diminished market, what BEVs sold better despite the wait for new incentives? The Top 10 monthly chart shows some unusual results as well as new entries. 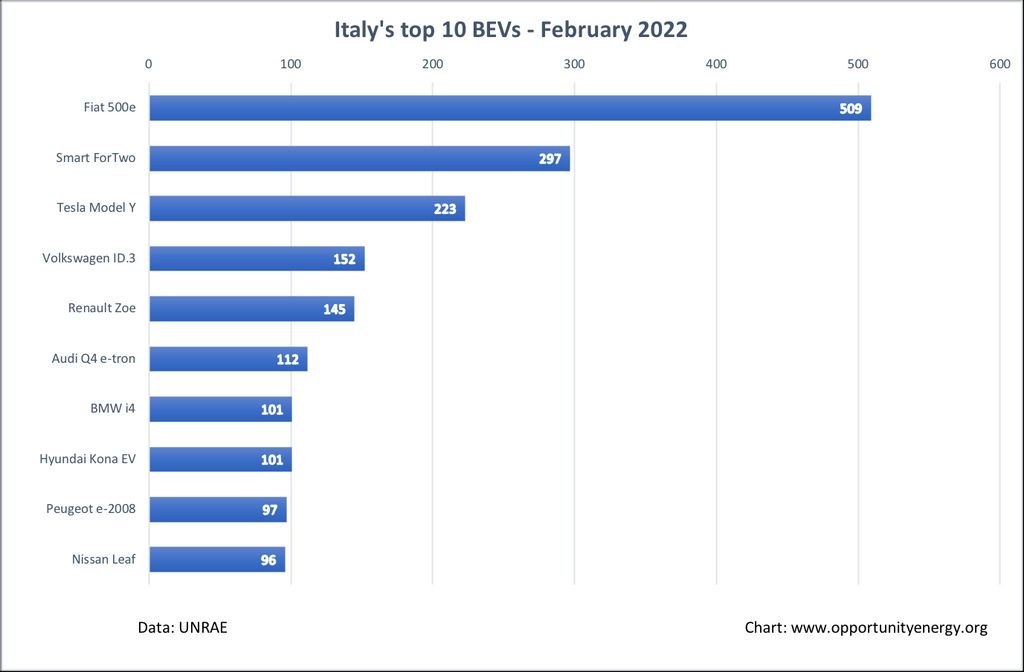 Fiat 500e gained its first crown of the year, reaching 509 registrations in a month without volume deliveries of top contender Dacia Spring. Smart ForTwo took second place with 297 units, also helped by the absence of another A-segment podium competitor, the Renault Twingo ZE.

The two successful minis by Renault group may have been subject to logistical shortages and are sure to be seen again soon. In the meantime, an unlikely challenger from the D-segment rose to third position: the Tesla Model Y, gaining its highest spot to date in the Italian BEV market with 223 registrations, in a month otherwise still marked by the absence of Tesla Model 3.

Out of the podium, VW ID.3 took the fourth position with 152 units, just ahead of Renault Zoe at 145. A new entry in the chart reached the sixth place, the Audi Q4 e-tron, a noteworthy Tesla Model Y competitor whose potential is yet to be confirmed in Italy. Just behind, the brand-new BMW i4 also debuted in the seventh position with 101 registrations, a tie with the seasoned Hyundai Kona EV, soon bound to be replaced by a completely new model. Peugeot e-2008 and Nissan Leaf closed a chart unusually featuring a high number of upper segment models. 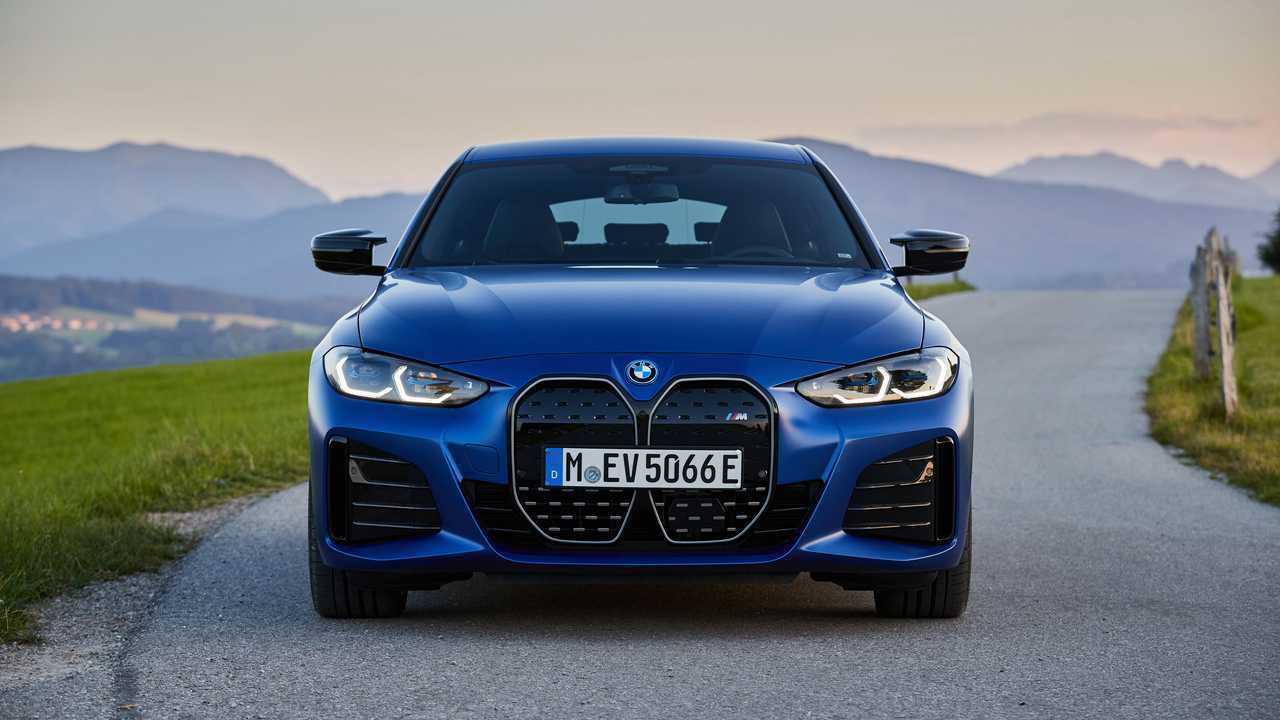 As a second month came and went without a clear electric mobility policy from the Italian government, the absence of incentives depressed the entire car market, including sales of the cheapest BEV models, thus greatly reducing the overall EV registrations numbers for the month.

Upmarket full electric models, on the contrary, kept selling at their usual pace given the lower sensitivity to discounts. The impact on the whole auto market could be felt very clearly for the first time, and policymakers took note of the situation. A new incentive scheme has now been under discussion for several weeks, to help the sector get out of the slump. It can’t come soon enough.