Home » Car Reviews » ‘It had to happen’: Caravans and campervans to be banned from Scottish ferry queues

‘It had to happen’: Caravans and campervans to be banned from Scottish ferry queues 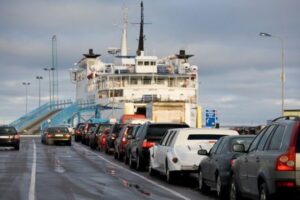 The state-owned company confirmed the decision following discussion with the Scottish Government’s Transport Scotland agency and island stakeholder groups. CalMac (Caledonian MacBrayne) said the change is being introduced with “immediate effect to prioritise passengers who made need accommodation and to ensure that deck space and capacity is used more efficiently.”

They also said that is intended to be a permanent change, although they will be reviewing it and feedback would be welcomed.

This comes as it was revealed that a travel lottery was in use for local residents getting on and off islands.

It emerged some routes have little or no space for cars for over three weeks.

People living on the islands off the Scottish mainland had made demands for extra sailings as the lifeline ferry network struggles to cope with demand.

This was initially exacerbated by covid restrictions, but has been affected more recently by breakdowns to the ageing ferry fleet.

Finlay MacRae, head of operations for CalMac, commented on the impending changes.

He said: “Motorhomes, campervans and vehicles towing caravans will no longer be given a standby or waitlist position on all bookable routes – either at the reservation stage or on the day of sailing.

“Restricting larger vehicles in standby lanes will allow us to make the best use of any remaining space for smaller vehicles, whose occupants may not have alternative options available for accommodation.

Everything drivers should know about penalty points [WARNING]

“It will also remove the issue of larger vehicles filling up standby lanes, and smaller vehicles having to be pulled out of car lanes if that is all that can be shipped at the end of the loading process.”

The changes are being made to close a loophole that was being exploited by some passengers.

There have been reports of motorhomes parking in the standby queues at ferry terminals overnight.

Drivers have been venting their frustrations on social media after the decision was announced.