Is This Lamborghini Urus Test Vehicle Riding On Centerlock Wheels? 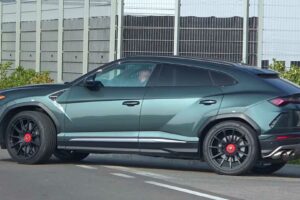 Here’s something very interesting. We aren’t talking about the Lamborghini Urus, though it’s certainly not boring with 641 horsepower. Its edgy styling isn’t boring either, but what’s up with those wheels? Anything red on a black wheel stands out in a major way, so it’s safe to assume Lamborghini isn’t trying to hide anything here. And what do we see? Could those be centerlock wheels?

That’s the consensus of this video from Varryx on YouTube. We see plenty of secret supercars from this particular channel, including camouflaged clips showing the forthcoming Urus Evo. This is the first time we’ve seen these black wheels with the red centers, but is it really the first time we’ve seen these wheels? Taking a close look at previous spy photos of the Urus Evo, these black spoked rims seem mighty similar. The only thing that appears different is the open center on the camouflaged prototypes, revealing a normal set of lug studs.

With that in mind, let’s take a second look at the wheels on this green Urus. Could those be standard wheels with dressed-up center caps?

Centerlock wheels certainly have some performance advantages, but those advantages are really only captured in a racing environment. With usable back seats and 5,000 pounds of bulky SUV in a family-friendly package, even a hardcore Urus isn’t what you’d call a race car for the street. And with considerably higher torque settings for that single central nut, they aren’t exactly easy to remove without specialized tools.

Weighting the advantages versus disadvantages of centerlock wheels, it’s hard to see Lamborghini using them on an SUV. Heck, there aren’t that many track-focused street cars using centerlock wheels. Clever center caps concealing a standard multi-lug arrangement makes more sense, and these could be one of the wheel options on the forthcoming Urus Evo, expected to debut in 2022.

Of course, we’ve certainly seen Lamborghini make some properly mad choices in vehicle design before, so we aren’t ruling anything out at this point.