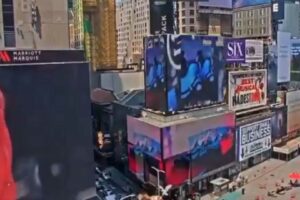 If Tesla’s not testing the waters of traditional advertising, someone else is spending big bucks on Tesla ads.

Tesla doesn’t advertise in the traditional sense, but if it decided to test out the waters, we bet the company would have a “go big or go home” approach. It wouldn’t make sense for Tesla to simply dabble in a bit of ad placement just to see what might happen. If we were Tesla, a football-field-sized video billboard in Times Square might do the trick.

Tesla could have easily grabbed a Super Bowl spot, and there’s nothing stopping it from placing ads in strategic locations, but it says it doesn’t advertise, and according to Elon Musk, Tesla has no plans to start producing or running ads. Moreover, the automaker certainly doesn’t need ads right now since demand is skyrocketing, it’s ridiculously production constrained, and it continues to raise vehicle prices to control demand.

We’ve learned over the years that just because Musk says it, it doesn’t mean it’s 100-percent true or that it won’t eventually change. The vocal CEO changes his mind all the time, and occasionally, Tesla makes decisions that seem to go against Musk’s previous announcements.

With all of that said, our friend Billy Crammer, one of the best spec ad producers we’ve come across, reached out to us with an interesting tip. He writes:

“About a week ago, some pictures and videos started appearing online of a Tesla ad that was playing on a billboard in Times Square. After digging further into this, I found out that this was not just any billboard on Times Square. It was the largest one there and it sits outside of the Marriott Marquis hotel. The billboard measures at 25,000 square feet and is as long as a football field. It’s even the biggest and most expensive billboard in the world, and on it, a Tesla ad was showing.”

We happened upon a few tweets showing these ads, but we didn’t think too much of it. Any wealthy individual or person with the right connections could have easily hired someone to produce the ads and then paid for them to run in Times Square.

Tesla leaves its “advertising” to its fans and owners, who often go to great lengths to get the word out. It would come as no surprise if a Tesla owner/investor did this. Heck, Sawyer Merritt could even have his hands in it, but who knows.

Being that Crammer is an “ad guy,” and the nature of the ad itself is something that appeals to him, he looked much more closely than we did. As the story goes, he noticed that the edits used in the ad playing on the biggest video billboard in Times Square are actually edits that he’s made for his Tesla spec ads. Check it out:

Did someone just grab Crammer’s ads from YouTube, get them in the right hands, and pay to have them broadcast in Times Square? If so, would Crammer be able to go after them?

Honestly, that’s not what this is about. Billy didn’t say anything to us about being upset that his edits were used. He seems excited to get his work out there, and he’s clearly a big Tesla fan. However, the whole situation did get him thinking. Crammer explained:

“Tesla famously doesn’t advertise so it’s strange that this ad appeared on a billboard in Times Square that apparently costs $100,000 a day to rent. Could this be Tesla silently going into advertising?

Maybe they bought the priciest billboard in the world to take the leap into advertising in a big, bold way. Not much has been mentioned about this because it mostly went under the radar.”

So, what do you think of all this? It’s certainly intriguing. Scroll down and start a conversation in our comment section below. We’ll leave you with one of Billy Crammer’s masterpieces.