Home » Car Reviews » Is Now The Time To Invest In EV Stocks Like Tesla? Buy The Dip?

Is Now The Time To Invest In EV Stocks Like Tesla? Buy The Dip? 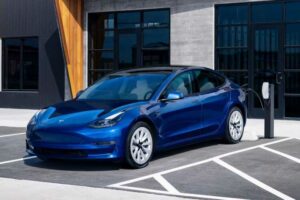 Wall Street has faced major selloffs over the past few weeks, causing a continued downturn in the market. While the auto industry simultaneously faces major disruptions with the onslaught of new electric vehicles, even EV giant Tesla has been susceptible to the bear market — though low share prices usually present an opportunity for skilled investors.

The overall stock market may be bearish, but the low price of EV stocks like Tesla and others has some investors considering if now might be the time to buy shares in EV companies, as noted by The Motley Fool. Beyond EV giant Tesla, auto startups such as Rivian and the China-based NIO have seen their shares fall even harder — again presenting investors with the option to buy shares at a cheap price.

Tesla is currently down about 40 percent from the stock’s high point, and high demand helped the automaker post an 87-percent quarterly revenue growth year-over-year in the first quarter. Despite this, Tesla’s production grew by just 69 percent, mirroring the fact that Tesla has increased its prices within the same time period.

The news comes as Tesla opens its Gigafactory Texas and Gigafactory Berlin, expected to help further increase production. However, the company has still been able to garner revenue growth at a greater rate than its production growth. This bodes well for investors, with Tesla’s control over its pricing model hardly dampening its skyrocketing demand.