Is Giga Berlin Tesla's Ticket To Taking Back EV Market Share In Europe? 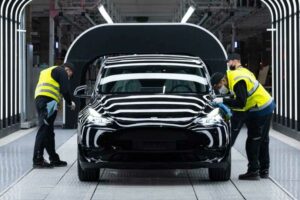 As electric vehicles take hold of the larger auto market, Tesla trails vehicle sales across Europe by a somewhat narrow margin. However, the U.S. automaker’s new Gigafactory Berlin-Brandenburg could be set to change that, some say.

Tesla could take back EV market share in Europe overall with its new Gigafactory Berlin, according to a report from The Wall Street Journal. For now, it’s still just getting started, but once it ramps up production at the Grünheide, Germany facility, many believe it could give Tesla an unfair advantage in the European auto market.

EVs are gaining traction across Europe, with new EV sales accounting for around one in six light vehicles sold in Europe in Q4 2021.

But the recent opening of Gigafactory Berlin marks a major shift for Tesla. Where it was once shipping cars from its Gigafactory Shanghai to customers in Europe, it can now ship German-made cars directly to customers across the continent.

The effect will not only increase the pressure put on other automakers in Europe (such as Volkswagen and Stellantis), but it will also increase the number of cars Tesla can deliver throughout the continent — while simultaneously freeing up Shanghai to increase output to China and neighboring countries.

Prior to establishing Giga Berlin, Tesla already became the most-sold auto brand overall in Norway last year as detailed by Reuters, with overall EV sales jumping to 65 percent in the country to make them more commonly sold than gas cars.

Beyond individual countries, Tesla’s Berlin facility may help the automaker reclaim the EV market in Europe, especially as other countries begin to surpass the same milestone.

Volkswagen could be one of the most affected automakers in the years to come, and Chief Executive Herbert Diess has been vocal about Tesla’s growing dominance over the past few years. Diess recently noted the U.S. automaker’s significance amidst the U.S. automaker’s establishment of Giga Berlin.

“Tesla for sure will be our most important competitor,” said Diess.

Still, other automakers are starting to take steps to shift more quickly to an EV focus, like Volkswagen who announced plans in March to invest $2.2 billion (2 billion euros) in an EV plant in Wolfsburg, Germany, as reported by Bloomberg.

Volkswagen Brand Chief Ralf Brandstaetter said the German automaker is “strengthening and sustaining the competitiveness of the main plant and giving the workforce a robust long-term perspective.”

Dubbed “Trinity” by the automaker, the Wolfsburg plant is shooting for a production time of just 10 hours per vehicle, in an attempt to become more efficient like Tesla.