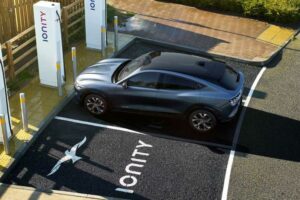 IONITY announced that its fast charging network is the first in Europe that offer the Plug & Charge feature in accordance with ISO 15118 standard.

It means that EVs with enabled Plug & Charge can be charged simply by plugging-in. The system will automatically take care of identification, authorization and billing. No more necessity for RFID cards or mobile apps.

With Plug & Charge, as soon as the charging cable is inserted in the vehicle, the vehicle is automatically identified at the charging station and authorized for charging. For this purpose, charging contracts are read directly from the car and protected by digital certificates. The charging process only starts after successful authentication. Billing is also automated with all the necessary information being stored in the vehicle’s on-board system. With IONITY Plug & Charge, payments at the charging station are a thing of the past, which provides maximum convenience for drivers of electric vehicles.

Unfortunately, it’s not yet a feature that everyone can use, as there is only a handful of new models with enabled Plug & Charge. The list includes Porsche Taycan, Ford Mustang Mach-E and Mercedes-Benz EQS.

Others will have to wait until manufacturers will release more EVs with the Plug & Charge enabled. Once the technical capability will be offered on both the car and charging station, the user must have an account that is available to the system.

IONITY explains that the Plug & Charge is very simple and convenient from the user perspective, but the development process was very complex as the industry had to solve all the compatibility and data security issues for all participants (charging networks, EV manufacturers, customers).

This is why it has taken a few years since the first attempt at the end of 2018.

But the software integration and validation process behind it are all the more complex and require tailored and intensive cooperation between all parties involved. To guarantee the functionality of Plug & Charge in accordance with the ISO 15118 standard, automotive and charging station manufacturers, as well as the various partners in the field of e-roaming, have all agreed on a uniform processes and interface that provides a secure certificate-based authentication process for IONITY customers.

“Getting the communication chains up and running was a major challenge. It was necessary to develop Plug & Charge as an entire ecosystem. Together with relevant players in the industry, we implemented a standardized system that enables all partners to authenticate each other, allowing the electric vehicle and the charging station to communicate while ensuring confidentiality, data integrity and authenticity.”

“At the end of 2018, we conducted the first tests on communication between the charging station and the electric vehicle. Since the beginning of 2020, we have established Plug & Charge at several stations, primarily in the German market, to give our partners the opportunity to conduct their own tests. After a gradual rollout over the last few months, we are pleased to announce that Plug & Charge is now available to our customers across the entire network.”

The feature of simply plugging-in and charging is not a new thing, as Tesla introduced it in the Supercharging network in 2012. However, for almost a decade, the network was compatible only with Tesla cars, which basically simplifies the problem to the bare minimum (no compatibility issue or customer’s data transfer between various companies).

Time will tell when and how well Tesla will be able to implement a comparable feature in its network once it will be available for other EVs, because the first attempt will be simply the use of an app.