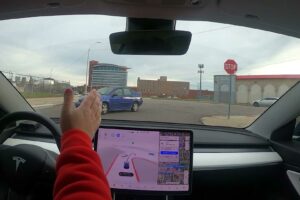 To the surprise of many, Tesla CEO Elon Musk spoke on the company’s Q1 2022 earnings conference call. He recently said he wouldn’t be on these calls unless there’s some major info to reveal. While Musk did make a few announcements, there was nothing shockingly new. However, he did suggest that people who want to learn more about the progress of Tesla’s Full Self-Driving Beta program should sign up.

To be clear, this isn’t something you just sign up for and begin using and testing. Rather, you have to pay a pretty penny for it. Once you’ve paid, there are really no guarantees. There are no guarantees you’ll become eligible to be a beta tester, and there are no guarantees related to when the technology will move out of the beta stage and become available to Tesla’s entire global fleet.

That said, Musk was essentially saying that he’s not going to provide data to the public, but there’s an “easy” way to collect data for yourself. Pay $12,000 for the package – or $200 per month – and then cross your fingers that perhaps you’ll get access to it. Tesla is only choosing certain owners to test the FSD Beta software, so many people who paid for it are still waiting to have access.

During the earnings call, one question directed to Musk was related to Tesla’s release of more data about the Full Self-Driving technology. This is certainly not an unfair question. If Tesla has 100,000 people enrolled in the program, and some beta testers have been testing it for about a year and a half, there should obviously be plenty of data to share. Moreover, various rivals in the self-driving space are sharing such information freely. Musk was asked during the call via Electrek:

“Elon has historically provided FSD timelines with not optimal accuracy. We love the optimism for 2022 release, but is there any data Tesla can share with investors to help them make their own conclusions on progress being made, interventions per mile driven or any other data?”

“The best way to reach your own assessment is to join the Tesla Full Self-Driving beta program where we have over 100,000 people right now enrolled in that program and we expect to broaden that significantly this year.”

He went on to elaborate that this is his “recommendation.” He encouraged people to “join” Tesla’s FSD Beta program so they can experience the technology firsthand and come to their own conclusions. The CEO explained that Tesla is improving the technology every two weeks or so with every new software update.

One interesting observation based on Musk’s words is that he noted that Tesla has “over 100,000 people right now enrolled.” We recently reported that 100,000 people are now testing FSD Beta. However, does 100,000 people enrolled in the program mean all 100,000 are officially approved to test it or are those just the people who signed up?

One can assume “enrolled in the beta program” means they are actual beta testers, but once again, Musk and Tesla are not clear, and there’s no way to reach out to the company for clarification.

It’s important to note that back in October 2021, it was reported that 150,000 Tesla cars were part of the Tesla FSD Beta enrollment program, though only a fraction of those drivers had official access to use and test the technology. The data showing 150,000 enrollments was based on the number of Tesla owners using the brand’s Safety Score tool in an attempt to get access to beta testing.