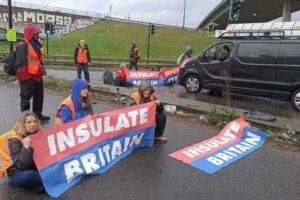 Insulate Britain protestors are continuing to block roads in and around London, despite a fresh injunction having been issued against them.

The protestors, who are calling for better housing insulation, set up roadblocks on the A40 in west London and at a roundabout in Dartford on Wednesday 27 October. They have also declared their intentions to use the M25 as “a site of nonviolent civil resistance”, urging those sympathetic to the cause to either avoid using the road or drive on it at no faster than 20mph.

The group restarted its protest activities on Monday 25 October following a 10-day break. It prompted Transport Secretary Grant Shapps to accuse them of “risking lives” and “ruining journeys” when he announced that a fresh injunction against such protests had been granted on a temporary basis by the High Court.

The interim injunction forbids “activities that obstruct traffic and prevent access to 4,300 miles of motorways and major A roads” and outlaws “activities which cause damage to the road surface and infrastructure”. The latter includes examples such as protestors gluing themselves to roads. Those who breach the injunction face the threat of prison time and fines, as well as a bill for court costs.

According to the Metropolitan Police, 53 arrests were made after the group’s roadblocks on 25 October, in which 63 protestors obstructed main routes in and around the City of London.

One protestor glued his head to the road, having to painfully free himself with scissors, while others glued their hands to the ground. Mayor of London Sadiq Khan said housing insulation was an “important cause”, but that the methods Insulate Britain was using would only drive people away. He called on the group to stop its protests.

Previous Insulate Britain protests have targeted Dover docks and the Blackwall Tunnel, as well as the M1 and M4 in and around London.

Do the police have powers to remove protesters?

At present, wilfully obstructing a public highway is an offence under the Highways Act 1980. Those found guilty can be given a maximum fine of £1,000.

Kent Police told Auto Express that when dealing with a human roadblock, officers will speak to protestors and determine how long they aim to continue. If disruption is planned for a few minutes, the police may wait it out, but longer protests have to be dealt with more actively.

The police have the power to remove protestors from the road and arrest them, but the challenge lies in ensuring no one is injured in the process. This is especially difficult when protestors physically attach themselves to surfaces or objects using glue, for example.

Do you agree with the protestors? Let us know in the comments below…