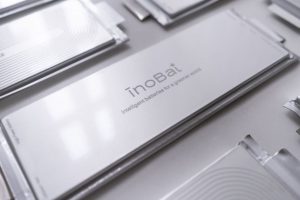 InoBat Auto, a European electric car battery producer, has announced what it claims is the world’s first ‘intelligent’ EV battery. Company co-founder and CEO Marian Bocek said the battery, known as InoBat, was developed after a year of R&D and was developed through a combination of artificial intelligence and high throughput platform technology.

By the end of 2021, the InoBat units will provide an energy density of 265 watt hour (Wh) per kg. This figure will increase to 298 Wh per kg by mid 2022, and up to 350 Wh per kg by the end of 2023. The ultimate target is 500 Wh per kg (achieved by optimising anode technology) – InoBat Auto will also gradually remove nickel from its batteries.

Production of the new battery will take place at the world’s first AI-driven R&D battery centre in Slovakia next year, with a 10 GWh Gigafactory confirmed to be built at the start of 2025 to serve global markets. A strategic partnership with global high-tech engineering company, Manz AG, has already been formed. It will supply production equipment for the R&D centre and production line, designed by architectural firm, Takenaka.

“The world’s first intelligent battery marks a huge leap forward in the electrification of transport. At InoBat, we want to fast track innovation to ensure the best batteries for any type of electric vehicle. These batteries will be tested and developed further with scale production starting next year,” Bocek said.

“No other battery cell maker has the technology to discover and demonstrate battery chemistries as quick. InoBat can provide its customers with the ‘best’ answer,” he added. By 2025, InoBat Auto said it could provide up to 240,000 electric cars with its intelligent batteries. Former Aston Martin CEO, Dr Andy Palmer also joined InoBat as non-executive vice chairman.