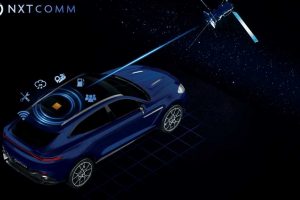 As a Delta 2Million Miler, I’ve spent lots of flight time airborne dealing with dodgy Wi-Fi, watching progress bars stall and web pages time out. So my ears perked up when I learned about a revolutionary new satellite antenna that promises to provide robust, ubiquitous data transmission to and from any moving object—planes, trains, and automobiles—anywhere on earth (except the poles).

Netflix streaming in any mode of transportation will be fun, but reliable in-car satellite internet connectivity as a backstop for today’s cellular vehicle-to-everything communications brings full vehicle autonomy another step closer to reality.

Satellite antennas for cars are not new. In February 2004 we covered the KVH TracVision A5—a gigantic, expensive roof rack-mounted contraption that nonetheless lost the DirecTV picture under every bridge. That electromechanically steered system was too huge and heavy to practically integrate into normal cars.

The solid-state, electronically steered “phased-array” systems providing internet connectivity on most planes are better, but their evenly spaced individual elements naturally cause destructive interference among one another. To compensate, more elements are added, driving up cost and power consumption, which in turn generates extra heat. The heat further compromises the antenna’s efficiency, effective transmission rates, and reliability.

NXTCOMM is commercializing a “fragmented aperture technology” born of Department of Defense-funded research out of the Georgia Tech Research Institute. It leverages modern supercomputing capability to strategically arrange individual antenna elements in ways that cause “destructive” interference to become “constructive” instead. These brainiac computers can also help make the antenna arrays conform to curved surfaces like an airplane fuselage or car roof.

Furthermore, the NXTCOMM antenna is essentially a big printed circuit board measuring roughly a quarter inch thick, so the form factor is vastly more efficient than that of competing approaches, and the parts count should be reduced by 20 to 40 percent relative to competing phased-array units. Without having to work against that destructive interference issue, the power draw drops by more than half that of a conventional phased-array setup.

A fragmented aperture antenna consists of a collection of different transmit and receive element “sub arrays” that can be directed to handle various bites of an incredibly wide frequency range, spanning from 300 MHz to 30 GHz. In the automotive realm, that means a single NXTCOMM antenna could be designed to handle GPS, satellite radio, and cellular, plus satellite internet/video. Because most of the above are receive-only, the antenna design can be simplified somewhat (though there is evidence that some providers may soon engage two-way communications—witness SiriusXM’s recent purchase of Pandora).

This technology currently costs far more than the roughly $100 manufacturers spend on those shark-fin antennas, so production will begin with fleet and luxury customers who are willing to pay more for the rich, high-speed (50-100 megabits/second) uninterrupted data, after which economies of scale will make the antennas more affordable. During this time, some automakers may even choose to show off the tech’s copper- and gold-printed circuitry under low-dielectric-constant glass covers. (The technology functions fine through non-metallic paint, though for now NXTCOMM warns against very dark paints that increases the temperature, degrading efficiency somewhat.)

A slow initial adoption rate is needed to match the ramp up in global satellite capacity. North America’s current constellation of mostly geosynchronous communications satellites (stationed about 22,300 miles high at the equator) run by Intelsat, SES, Hughes, and Viasat is capacity constrained, so providers will initially have to charge higher connectivity prices—perhaps 10 times that of current cellular data plans. But SpaceX has won approval to send up 12,000 low Earth orbit (250-550 miles) satellites for internet connectivity, of which 422 are already up. Amazon and Telesat are planning similar LEO constellations. That added capacity can only democratize the service plan charges.

Those promising steps aside, fully autonomous driving will have to rely to some extent on vehicle-to-vehicle and vehicle-to-infrastructure communications (V2V and V2X). In a big, wide-open country like the U.S., there’s no foreseeable way of guaranteeing universal connectivity with terrestrial cellular towers. If I’m going to trust satellites to keep my autonomous vehicle connected, then they’d better work a heckuva lot better than the Gogo Wi-Fi I’ve grown used to. NXTCOMM’s new antenna promises to do just that.