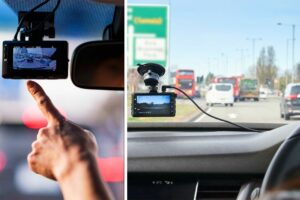 New data from 42 police forces across the UK shows the number of video reports received via the National Dash Cam Safety Portal (NDCSP) has increased by 20 percent. The Portal is used by police forces to monitor dangerous driving offences, with the latest data showing it is on the rise.

This is expected to continue throughout June, due to the improved weather conditions and more Britons going on holiday.

May also saw a rise in dashcam submissions, given the numerous bank holidays and more people on the road.

With continuing airport chaos, more drivers are expected to opt for staycations, which will most likely result in more instances of dangerous driving.

The NDCSP was launched four years ago in the summer of 2018, in partnership with Egress who is responsible for developing and delivering the platform’s technology.

Since then, the platform has seen nearly 50,000 total uploads and found the West Midlands to be the region with the highest number of dangerous driving clips uploaded via the Portal.

The platform, which was built to allow motorists to quickly and securely upload footage of dangerous driving to the relevant police force, has found the West Midlands to have had 13,330 driving offences reported since its inception.

Bryn Brooker, Head of Road Safety at Nextbase, urged drivers to use the platform to keep others safe on the roads.

He added: “Over the past four years, the data has shown that motor-related offences in the UK reported through the Portal have been steadily on the rise.

“With more and more cars on the roads, and many opting for staycations, it is crucial that motorists take more care when driving.”

Along with the West Midlands, the remaining four of the top five regions are West Mercia, Warwickshire, North Yorkshire and Northumbria with a combined total of 38,923 offences recorded in the last year.

This total is higher than the next 28 regions combined.

Lee Barton, an ex-West Mercia police officer and now official consultant, commented on the data and pointed to the number of holidays in May as a reason for incidents.

Mr Barton said: “The culmination of bank holidays and the public opting for staycations has resulted in increased activity on roads in the UK.

“Naturally, with this comes a worrying spike in dangerous driving offences.

“The Portal has helped police forces all around the country identify dangerous drivers and as we continue to see the public interacting with the portal, we will be able to make our roads safer.”

This comes as two drivers were caught driving “hands free” by police officers patrolling in one of National Highways’ unmarked HGVs.

These are the latest in over 28,000 offences which have been recorded by officers in the Operation Tramline HGV cabs.

The unmarked HGV cabs are now being used as part of a multi-agency Week of Action on the M6, taking place from Monday, June 13 to Sunday, June 19, which aims to reduce the number of incidents on the motorway.

National Highways deals with almost 180 reported incidents on the M6 every day.