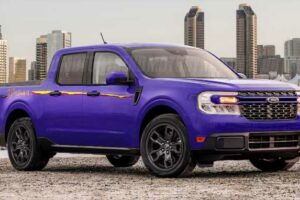 Every era has a sine wave of retrospective coolness. The ’90s bright, flashy color palette became deeply uncool for a few years, but the passage of time has a way of highlighting the positive. Take the 1993-1998 Ford Ranger Splash is not really a sporty pickup in the modern sense, but as was the fashion of the time, it took on some sporty cues (including its distinctive Flareside bed). Since the new Ford Maverick is in most respects a similar-in-size to the compact Ranger of yore, and nostalgia for the ’90s has hit the mainstream (think of the Radwood events), why not make a Maverick Splash, Ford? Heck, Ford just recently renewed its trademark of the “Splash” name, so it’s not like we’re pulling this out of thin air.

The original Ranger Splash welcomed additional color options for the 1995 model year, and our proposed Maverick Splash is wearing a sharp shade of purplish-blue inspired by the original Ranger Splash’s Sapphire Metallic paint code. Rather than the five-spoke steelies or deep-dish cast aluminum wheels found on the original Splash, we added a set of five-spoke wheels from the Maverick’s SUV-relative, the Bronco Sport. Bold, contrasting graphics are a throwback to the original Splash’s squiggly side stripes. In a nod to the body-colored exterior elements, the bar spanning the Maverick’s grille is also body-colored.

We considered doing some virtual surgery to the bed to make it a Flareside, but unlike the old body-on-frame Ranger, the new Maverick features unibody construction. This means significant engineering (and factory retooling) would be required to stamp a new body shell—something Ford, even if it revived the Splash as a trim, almost certainly wouldn’t do.

And while the Ford Ranger Splash could only hope to look sporty (although, to be fair, it did have a slightly lowered and retuned suspension setup), our theoretical Maverick Splash, with its available turbocharged 2.0-liter “EcoBoost” four-cylinder engine, is likely to match its dynamic looks with formidable performance. While we doubt Ford would add any power to the Splash’s stable relative to that of the run-of-the-mill Maverick EcoBoost, it’d likely fit the colorful Maverick model with a slightly sportier suspension setup (well, that’s what we imagine).

The Maverick already looks pretty good in bolder colors, such as Cyber Orange and Velocity Blue. Bringing back some heritage colors, such as the fun purplish-blue featured on our imagined Maverick Splash, as well as the reds and yellows more typically associated with the original Ranger Splash, might be a neat way for Ford to bring an extra dash of street appeal to its new compact pickup.