Home » Car Reviews » If Lucid Air Coupe Was Real, It Would Probably Look A Lot Like This

If Lucid Air Coupe Was Real, It Would Probably Look A Lot Like This 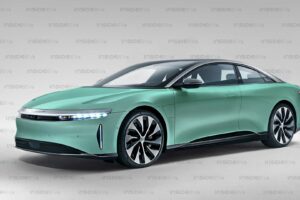 Lucid has burst onto the scene with what has been described (and tested) as one of the most well-rounded and competent premium electric sedans on the market, the Air. It’s been receiving rave reviews for the way it drives, its range, its interior and its understated good looks.

In fact, I think it looks so good that with only minor modifications, you can turn it into a very believable coupe. So that’s what I set out to do – turn the Air sedan into a two-door – even though Lucid has made no mention of such a model being in the pipeline.

Once Lucid successfully ramps up Air production, it will shift focus to the Gravity electric SUV, which should debut sometime in 2023 if all goes to plan and then go on sale one year later. It will be based on the same Lucid Electric Advanced Platform (LEAP for short) and it will offer a roomier interior, more practicality and slightly more off-road capability (Lucid has made it clear that it is a more on-road-focused vehicle, not an off-roader).

But what about those buyers who would like to buy a Lucid, but they don’t really need the practical interior, or even the four doors of a sedan. Well, my interpretation of what an Air Coupe could look like I think fits the bill because it looks much more like a grand tourer than the sedan when you remove two of the doors and change the shape of the roof.

But that’s not all I did. I’m not sure how realistic this would be (meaning it could need significant and possibly prohibitively expensive changes over the sedan), but I actually extended the front end and shortened the rear by the same margin. This basically means the greenhouse is set slightly further back in my coupe rendering, but it really strengthens the grand tourer look that I was going for.

Don’t expect Lucid to make anything like this – or even the Air wagon that I made a speculative rendering for either, as cool as these two (very different) variants would be. But hopefully it’s the kind of company that won’t settle with having an SUV as its flagship model, so hopefully after the Gravity debuts, the company will have enough resources to conceive a third (hopefully two-door) model.