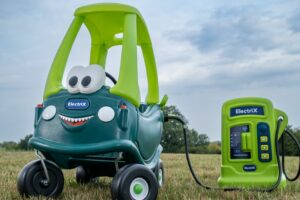 Over half of children believe they will drive an electric car when they grow up – and they can now take their first step to doing so, as the iconic “Little Tikes” toy car has gone electric.

The famous red-and-yellow Cozy Coupe, which has been giving children their first taste of “driving” for over 40 years, has had a green makeover, replacing its classic petrol filling cap with an electric socket and charger.

It comes as a poll of 800 children, aged six to 12 years old, revealed their top ideas for how to save the planet – with almost half (44%) saying they would like their families to make the switch to electric vehicles.

One in four said they would like to see more electric vehicles on the road to reduce reliance on petrol and diesel – and 54% said they will drive an electric car when they are older.

Other imaginative ways kids would like to protect the planet include banning homework to save paper – and replacing cars with kangaroos.

LV= and Electrix, which commissioned the study, have collaborated with toy brand Little Tikes on the one-off electric vehicle makeover, to get families thinking more sustainably.

In 2016, Little Tikes launched the “Go Green Cozy Coupe Dino”, which is constructed from recycled plastic and packaged in recycled materials to help minimise environmental impact.

The iconic red and yellow livery and accommodating dimensions have remained a constant, but small features have been updated – such as significantly altering the look from the original slimmer roof poles in 1999, and giving the car a face lift in 2009 with cartoon eyes and a friendly smile.

A spokesman for LV= and Electrix, which commissioned the study, said: “It’s great to see the next generation thinking about innovative ways to save the future of our planet, and coming together to show their passion for a greener future.

“It’s clear that climate change is important to children, and we wanted to show them the benefits of using an electric car through play.

“However, we’re not sure some of their suggestions are ones we’ll be able to bring in long-term – certainly the kangaroos might have something to say about it.”

The study found kids also want to save earth by encouraging people to eat more carrots to improve night vision, thereby reducing use of lights.

Others would be happy to do their civic duty and reduce water use – by stopping brushing their teeth.

And there were even suggestions about sending astronauts to the sun to bring back light to save on energy costs.

Researchers also explored children’s feelings about climate change in general, finding that two-thirds (67%) have tried convincing their parents to be more eco-friendly.

More than half (52%) have told off mum or dad, or another guardian, for doing something that wasn’t helpful to the planet.

The top reason parents got a telling-off from the kids was for buying new clothes when they’ve got a wardrobe full already (32%).

And the same amount expressed concern about mum or dad driving a petrol car instead of something more environmentally friendly.

It emerged that nearly seven in ten kids (69%), who are aware of climate change, learned about it at school.

Another 43% have been informed by family members, while 36% have seen information on TV.

And more than half of kids (58%) believe grown-ups should be doing more to help the planet, according to the OnePoll.com data.

The spokesman added: “Switching from a petrol or diesel car to electric is something families can do to do their bit for the environment.

“We understand that making the change to an EV can be daunting, so we’re here to help with every step of the process.”

Alaina Cornish, for Little Tikes UK, said: “The Cozy Coupe has been an integral part of so many of our lives since its launch in 1979, so we’re delighted to announce our collaborative project with LV= with the concept of the first-ever, one-off electric makeover.

“We’re hopeful the one-off iteration will spark conversations about the importance of electric vehicles for the future.”

To find out more about it, visit here.

THE TOP 15 WAYS KIDS WANT TO HELP SAVE THE PLANET: