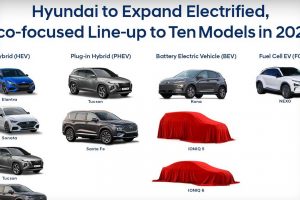 The list will include two plug-in hybrids and three all-electric vehicles (including two all-new BEVs).

Hyundai announced today that by the end of 2022, it will offer a total of 10 electrified model xEVs (BEVs, PHEVs, HEVs and FCVs).

On the zero-emission front we see three battery-electric cars, the Kona Electric and two all-new, not yet to be unveiled models: Hyundai Ioniq 5 and Hyundai Ioniq 6. There is also the hydrogen fuel cell Hyundai NEXO.

In total, seven of those 10 xEVs will be classified as crossover/SUVs and only three as cars (including the Ioniq 6).

“This product blitz includes eco solutions for many of Hyundai’s current products as well as all-new models, such as the Ioniq 5 and Ioniq 6. Product details for these Hyundai models have a steady roll out cadence throughout the 2021/2022 timeframe.”

It’s all that we have for now, but it’s also enough to remain optimistic about the progressing electrification and all-new stand-alone BEV models, based on a dedicated BEV platform (the Ioniq subbrand).