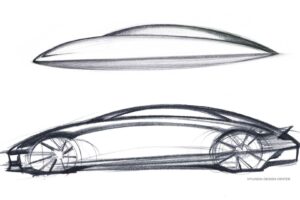 Hyundai has just released another teaser of the highly anticipated Ioniq 6 model, which will be fully unveiled later this month.

The new image is a design concept sketch, which “previews the aerodynamically-sculpted streamliner silhouette for the new EV era.” Aerodynamics appear to be a key element of the Hyundai Ioniq 6 – inspired by the company’s Prophecy concept EV – which will be called the Electrified Streamliner.

The South Korean manufacturer has not released specs yet, but considering the design and how big the impact of aerodynamics is on the driving range, we guess that its range might be a pretty high.

The Ioniq 6 is based on the Hyundai Motor Group’s Electric Global Modular Platform (E-GMP), which allowed the Ioniq 5 to achieve more than 300 miles on a single charge. In the case of Ioniq 6 with the same battery capacity of 77.4 kWh, it could be noticeably more, we guess.

Who knows, maybe we will see also a worthy successor to the efficiency king – the retiring Hyundai Ioniq Electric.

Hyundai underlines also that the Ioniq 6 uses E-GMP to stretch the wheelbase and optimize the interior design, which heralds a really spacious interior.

More teaser images will be revealed soon, including both exterior and interior designs, so let’s stay tuned for more.