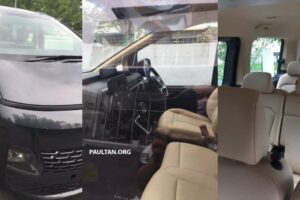 Hyundai-Sime Darby Motors (HSDM) has begun teasing a new, 10-seat variant of the Staria, which was sighted in spyshots earlier this month. “Something huge will be greeting you soon,” the company captioned a shadowy image posted to its social media pages.

The Staria was first launched here last October and is currently available as the 2.2D Premium, which is a seven-seater priced at RM366,768 on-the-road without insurance. For now, HSDM did not provide any official details of the 10-seat variant joining the line-up, but prior spyshots suggest it will have a revised kit list compared to the 2.2D Premium.

Changes include a more basic head unit in place of an eight-inch touchscreen, a traditional gear lever instead of buttons for the transmission, plus simpler air-conditioning controls. Carry over items appear to be leather upholstery and a digital instrument cluster.

Something huge will be greeting you soon.
Stay tuned to this space.

Elsewhere, the large front grille has a different design and is body-coloured without the 2.2D Premium’s gloss black finish and parametric-inspired trim piece. The headlamps also appear to be halogen-type units instead of LEDs on the current sole variant.

The 2.2D Premium’s seven seats are spread across three rows in a 2-2-3 layout with second-row captain chairs, but the 10-seater sports four rows in a 2-3-2-3 arrangement. Air vents are still located in the ceiling, which doesn’t get an Alcantara headliner, and the frontmost row comes with a folding centre console.

We expect the 10-seater to use the same powertrain as the 2.2D Premium, which features a 2.2 litre four-cylinder turbodiesel rated at 177 PS and 431 Nm of torque and paired with an eight-speed automatic transmission sending drive to the front wheels.

There are some markets that call this model the Hyundai Staria 11-seater but the extra seat is in the first row, making it a 3-3-2-3 configuration. However the middle seat of the first row does not have a proper three-point seat belt so it cannot be considered an official 11th seat in Malaysia.

No official launch date has been revealed just yet, but it shouldn’t be long before the new Staria variant goes on sale. If you can make do without some of the 2.2D Premium’s features in favour of some extra seats, the 10-seat variant may be a good fit, possibly at a lower price point?

It’s been speculated that the 10-seat Staria could be a replacement for the current, 11-seat Grand Starex, which is classified as a commercial vehicle and available in Executive Plus guise for RM165,888. However, HSDM has said in the past that the Grand Starex would continue to be sold alongside the Staria in Malaysia, as each have their own target segments. We’ll have to wait and see if the company sticks to this approach.