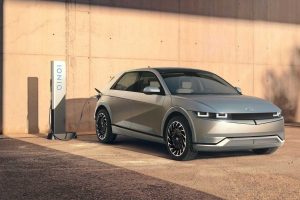 The Ioniq 5 is built on Hyundai Motor Group’s BEV architecture called Electric-Global Modular Platform (E-GMP). The company says the architecture allows the crossover to have “unique proportions on an elongated wheelbase.

“With E-GMP, Ioniq 5 offers innovative interior design with eco-friendly materials in many touchpoints, strong performance mated with ultra-fast charging and a vehicle-to-load (V2L) function as well as advanced connectivity and driver assistance features that will offer the ultimate in-car experience while ensuring safety,” the company said.

“Ioniq 5 will accommodate lifestyles without limits, proactively caring for customers’ needs throughout their journey,” said Thomas Schemera, executive vice president and global chief marketing officer. “It is truly the first electric vehicle to provide a new experience with its innovative use of interior space and advanced technologies.”

We’ll be the judge of that.

Meanwhile the company says the Ioniq 5’s shape is based loosely on the Hyundai 45 concept from the Frankfurt motor show, a car styled as a nod to the Giugiaro-penned 1974 Hyundai Pony hatchback. The automaker calls the 5’s design “progressive,” representing “a departure from past norms, exploring a new design freedom offered by a dedicated BEV platform.”

Evoking the Hyundai Pony’s attitude, the company said, means the new electric crossover highlights Hyundai’s “45-year journey to become a part of customer’s lifestyles, creating a common thread from past to present and future. This is the redefinition of timeless design, a theme that will expand as the Ioniq lineup grows.”

The 5’s “timeless” design rides on a 118-inch wheelbase, four inches longer than Hyundai’s Palisade. Overall length is 182.4 inches, 13 inches shorter than the Palisade and about the same size as the Tucson, so clearly the wheels are pushed out to the corners. The car has the company’s first clamshell hood, a feature Hyundai says minimizes panel gaps for better aerodynamics. A V-shaped front incorporating daytime running lights defines the look the company says.

Flush door handles help make the side styling look cleaner and add some aerodynamic efficiency, as do the aero-optimized wheels. The crossover’s angular shapes are reminiscent of surfacing seen on the new Tucson. The C-pillar shape is one example of a styling element inspired by the 45 EV concept. The automaker says the shape was designed for optimum use of the E-GMP platform and that the EV-specific design will carry over to future Ioniq models.

“A new mobility experience for the next generation—this was the mission from the first day we began this project, to look ahead towards the horizon, but stay fundamentally Hyundai,” said SangYup Lee, senior vice president and Hyundai Global Design Center boss, who also said he thinks the production car looks better than the concept. “Ioniq 5 is the new definition of timeless, providing a common thread linking our past to the present and future.”

A notable feature inside is what the company calls the Universal Island, a moveable center console able to slide back as much as 5.5 inches. The Universal Island and the flat floor where the batteries are stored are designed to allow more freedom of movement inside, and the glass-panel roof (solar is optional) adds to the airy feeling. “Much like the living room of a house,” Hyundai officials said. The power seats and many interior touchpoints — headliner, door trim, floor and armrest — use eco-friendly, sustainably sourced materials, such as recycled PET bottles, plant-based (bio PET) yarns and natural wool yarns, as well as eco-processed leather with plant-based extracts and bio paint with plant extracts.

The new crossover is available with a choice of battery pack options, either 58 kWh or 72.6 kWh and two electric-motor layout choices, either rear motor only or front and rear motors. All the variations deliver a 115-mph top speed. The top of the lineup is an all-wheel drive option paired with the 72.6-kWh battery, producing a combined power output of 225-kWh (about 300 hp) and 605 Nm (446 lb ft) of torque. Hyundai says this combo is good for a 5.2-second zero to 62 mph time, adding that the two-wheel drive/72.6-kWh battery combination should deliver around 300 miles of range on the Worldwide Harmonized Light Vehicle Test Procedure (WLTP) standard.

The E-GMP can support both 400-volt and 800-volt charging infrastructures without the need for additional components or adapters. Hyundai says the multi-charging system is a world-first patented technology, operating the motor and inverter to boost 400 V to 800 V for stable charging compatibility. With a 350-kW charger the car can be charged from 10 percent to 80 percent in just 18 minutes and customers only need to charge the crossover for five minutes to get 100 km of range (WLTP), the company says.

The V2L function basically makes the crossover a power source to charge electric devices such as electric bicycles, scooters or camping equipment. The V2L function supplies up to 3.6 kW of power from a port located under the second-row seats and another port at the car’s charging port. Hyundai says that with V2L the crossover “supports a sustainable electric mobility lifestyle.”

The cockpit features a 12-inch, full-touch infotainment screen and 12-inch customizable digital gauge cluster. In a Hyundai first, the car also has an augmented-reality head-up display, essentially turning the windshield into a display screen.

Hyundai says the Ioniq 5 also has next-level Hyundai SmartSense. The driver-assistance system includes the second generation of highway driving assist (HDA 2), which uses a front-view camera, radar sensors, and nav data to control the car’s speed and following distance, while keeping the vehicle centered in its lane. It can also assist the driver in lane changes. There’s also forward-collision avoidance assist (FCA), blind-spot collision-avoidance assist (BCA), and several others.

Connectivity is a priority as you probably guessed, with the 5 offering the latest version of Hyundai’s upgraded Bluelink connected car services. The automaker says there are several new nav features including connected routing, last-mile navigation and a new user-profile feature. The Bluelink app displays range, battery state and charging times when plugged into public or private charging points. Customers can access an advanced battery management system to select charging times that best fit their schedule or their budget by making the most of off-peak electricity rates.

Hyundai says Bluelink can also store selected settings in the Bluelink cloud so you can remotely update personalized preferences and vehicle status notifications tell you if you left the doors unlocked or windows open. With remote charging you can start and stop charging via the smartphone app and remote climate control allows you to schedule pre-heating while the car is connected to an external power source. You can also control cabin A/C, radio, hatch opening/closing, heated steering wheel, heated/cooled seats and other functions via voice control. The Ioniq 5 also has a premium Bose sound system with eight speakers including a subwoofer.

The car goes on sale in the U.S. this fall and we will get pricing closer to launch. The 5 is the first of more Ioniqs to come. A midsize crossover, Ioniq 6, taking design cues from the stunning Prophecy concept, follows the 5 in 2022. The Ioniq 7 arrives in early 2024. Hyundai is using odd numbers for crossovers and even numbers for sedans. Officials said they think the company can sell 70,000 5s globally in the first year.

Officials also said at the moment the company hasn’t decided if there is going to be an N performance version, but that in terms of engineering and technology the company is ready to go and is studying its options. “Please stay tuned on that,” an official said.

Hyundai has said the Ioniq brand is not going to offer hybrids or plug-in hybrids. It’s all EV. Last Fall Ioniq’s director of product strategy, Yuval Steiman, told Autoweek that each Ioniq model has a distinctive and different design, though they’ll all have the 45 concept’s pixel headlights. He also said all Ioniqs are being designed and engineered as EVs from the ground up. The Ioniq 5 is “roughly the size of our Tucson,” while the Ioniq 6 is going to be a “very sporty EV sedan.” He said Ioniq 7 will be a larger SUV, adding there are “no styling indication of that yet.”

Steiman also said the Ioniq brand is “meant to symbolize the company’s global goals toward expanding electrification. It’s a symbol of where the company is going moving forward, long term.”

Which begs the question, are EV-only brands a good idea, and should more automakers be planning them?

Michelle Krebs, Executive analyst, Cox Automotive, told Autoweek that “everyone’s looked at the Tesla model and how successful it’s been, particularly in terms of selling direct to consumers. So [automakers] are trying to figure out what their clean-sheet-of-paper, unique twist is going to be to sell EVs.”

Krebs told us spinning off a stand-alone brand is risky, especially in the U.S. “It’s very expensive to establish a new brand and it’s difficult to make a profit initially because there’s no service or used car business built up, and that is where dealers make a lot of money.”

It’s also going to be a tougher go in the U.S., she told us, because we have a small customer base that’s growing far slower than other countries,’ and we don’t yet have a large EV-charging infrastructure. She said Hyundai needs to be prepared to “not make money for a while.”

Krebs said one big positive is that having the stand alone brand makes it clear to the consumer that it’s something new and different and being operated in a different way.

She also pointed out that the U.S. infrastructure growth is supposed to begin happening faster under President Biden, but we don’t yet know how successful he’ll be.

José Muñoz, Hyundai’s global chief operating officer and Hyundai Motor America president and CEO, said he sees the future of electrification in the U.S. as “a great opportunity for our company.” He acknowledged the charging infrastructure is a big hurdle and that is a key priority for EVs to succeed. He said the new Biden Administration is focused on this technology and he thinks that can only help, adding he’s confident that as a sub brand Ioniq is going to represent nothing less than a paradigm shift for Hyundai in the U.S.

We’ll be watching this very closely.

Log in to the comments and tell us if you’re going to spring for the Ioniq 5.