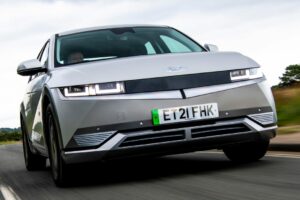 Commenting on the wins, SangYup Lee, Executive Vice President and Head of Hyundai Global Design Center, said, “With IONIQ 5, we set out to create a new mobility experience — a game-changer. This extraordinary vehicle was made possible by the passion and efforts of designers and engineers who pushed the boundaries of what’s possible in the EV space.”

The World Car Awards are voted for by a panel of 102 international journalists including Auto Express editor-in-chief Steve Fowler and chief columnist Mike Rutherford.

Other winners in the Awards, announced at the 2022 New York International Auto Show, included the Mercedes EQS named World Luxury Car of the Year, Audi’s e-tron GT getting the Performance Car trophy and the Toyota Yaris Cross winning the new World Urban Car of the Year Award.

In more good news for Hyundai, Luc Donckerwolke, Hyundai Motor Group’s Chief Creative Officer, had been named the 2022 World Car Person of the Year in February for his significant contribution overseeing new model developments, including IONIQ 5.

The 2022 Auto Express Awards aren’t far away, with the winners set to be announced at a live ceremony in London on July 5.