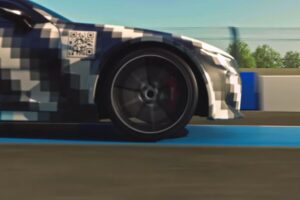 It’s been a weird few weeks for those interested in hydrogen as a piece of the puzzle for our green future, as a bit of controversy over the impact of “blue” hydrogen produced from natural gas (as opposed to “green” hydrogen produced from splitting water into oxygen and hydrogen) erupted recently. Amid this conversation, Hyundai’s teaser for a performance car powered by the exceptionally light elemental gas takes on a bit of a different cast than it might have several weeks ago.

But whatever type of gas actually powers the (apparently CGI) car in the teaser video we see here, it represents a potential new chapter in Hyundai’s performance vehicle lineup—one that, from the looks of it, snails might not enjoy very much. The teaser video shows said snail being vibrated vigorously by the oncoming car, then splashed by its pure water exhaust as it whines around a racetrack. We’re going to assume it’s a fuel cell electric vehicle (FCEV), then, one using a hydrogen fuel cell to produce energy powering an electric motor—hence the electric motor whine, and the water byproduct.

We expect Hyundai to expand the N brand to include alternative to internal combustion, and given Hyundai’s significant interest in hydrogen, we’d expect at least fuel cell development mules if not an eventual production model. (What infrastructure Hyundai would use to fuel such a car should it reach production is an open question.)

Hyundai is already working on a motorsport application for its hydrogen fuel cell technology, although it’s not an onboard system. The Pure Electric Touring Car Racing series (Pure ECTR) will utilize large, 160-kW hydrogen fuel cell generators to recharge 65-kWh ECTR batteries within an hour, the company claims—including those for its Hyundai Veloster N ECTR EV race car. Surely the competition will provide valuable data about how the batteries and the fuel cell operate in high-stress situations.

We should know more on September 7 in South Korea, when the company plans to stream its presentation on hydrogen technology. Hyundai promises to reveal several FCEVs at the event, and hopefully we’ll get a better look at whatever this performance vehicle is at that time.