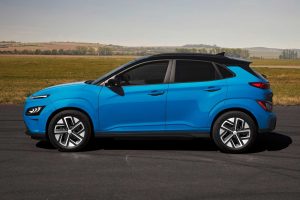 Please, Hyundai, do the same in the States.

Canada is in a similar situation as the U.S. when it comes to EV adoption. Unlike many other parts of the world, it appears people just aren’t that interested in electric cars. The media still points to the high price of EVs, the lack of charging infrastructure, and even range anxiety as reasons there aren’t more EVs on North American roads. However, one of the main reasons people aren’t buying EVs is because supply is limited.

All we need to do is look at Tesla to see that many people want EVs and the company can’t even produce enough cars to satisfy demand. Moreover, look at most other automakers making EVs and only selling them in select states in small numbers. Waitlists for electric vehicles are very common in the U.S. and Canada.

As soon as the Hyundai Kona Electric came to market, we were excited to check it out, and a few of us even entertained buying one. People in our comment, as well as our InsideEVs Forum seem enamored with the electric crossover. Unfortunately, Hyundai decided only to sell it in limited quantities in select states. Added to that, some dealerships marked up the Kona EV since there was so much demand and little supply.

Fast-forward to the present and it’s still not easy to get a Kona Electric in the States. However, in Canada, Hyundai is taking advantage of the demand and long waitlists by upping inventory. According to an article on Drive Tesla Canada, Hyundai Canada is nearly tripling the number of Kona EVs coming into the country.

The automaker announced that some 7,900 Kona EVs are coming to Canada in 2020, while only 2,600 were important in 2019. Finally, Kona EVs will be sold in Canada by the country’s second-largest EV distributor behind Tesla, with no waitlist. Hyundai Canada sales director Ken Maisonville shared:

“In the first month of sales, we knew the global supply simply wouldn’t be enough. We have increased our supply every year but still weren’t able to catch up with the demand.”

Hyundai is able to increase its global supply of Kona Electric crossovers thanks to a recent factory opening in the Czech Republic. The factory only makes Kona EVs for Europe, however, this allows South Korean factories to ramp up efforts for North America-bound vehicles.

Are you shopping for a Kona Electric? If so, have you had any luck? Let us know your location and the status of the Kona EV supply in your area.