Hyundai announces plans to go all-electric in Europe in 2035 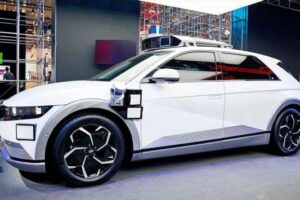 Hyundai will stop selling internal combustion-powered cars in Europe in 2035, and become completely carbon neutral by 2045

Hyundai has used the Munich motor show to announce that it will stop selling internal combustion vehicles in Europe in 2035, with the rest of its markets following suit in 2040.

By 2030, Hyundai aims for electric vehicles to account for 30 per cent of its global sales – and that number is expected to swell to 80 per cent by 2040.

Hyundai has already started this journey, with the pure-electric Ioniq 5 hatchback (which won Auto Express’s current Car of the Year award) but to meet these new targets, the company will need to launch some new EVs.

Conveniently, the brand confirmed the launch of the new Ioniq 6 in the same announcement, which will draw inspiration from the Prophecy EV concept and become a fresh rival for the Tesla Model 3. It’s expected to make its debut next year.

Then in 2024, the Ioniq 6 will be joined by the Ioniq 7. The seven-seat SUV will be the third model under Hyundai’s pure-electric spin-off brand and, like its siblings, it’ll be based on the group’s scaleable E-GMP underpinnings.

This electrification push will be supported by a host of environmentally conscious initiatives, including investment in hydrogen fuel cell technology, greener hydrogen extraction and a drive to achieve carbon neutrality across its entire business by 2045.

Hyundai has already launched the hydrogen-powered NEXO SUV, but the firm is planning an evolution of the model in 2023, along with a hydrogen-powered MPV. In 2025, the brand will also unveil a hydrogen fuel cell-powered, Range Rover-sized SUV.

The firm is looking at greener methods of harvesting hydrogen for its next-generation vehicles, as well as cutting the amount of carbon emissions from its manufacturing plants by fitting them with renewable energy sources, such as solar panels. By 2040, Hyundai aims to meet the energy requirements for 90 per cent of its operations with green energy.

Hyundai has also started considering what to do with its electric vehicles once they reach the end of their usable lives. In time, the brand says it will convert the batteries from its cars into energy storage systems.

The Korean manufacturer will even use its new E-GMP platform to go up against Volkswagen and MOIA in the self-driving ride-hailing field, with plans to launch a new Ioniq 5-based robotaxi in 2023.

“We will strive to do more for the environment via multiple sustainability projects in the months to come, inviting everyone to join us on our journey towards a cleaner future.”

What do you make of Hyundai’s electrification plans? Let us know in the comments section below…