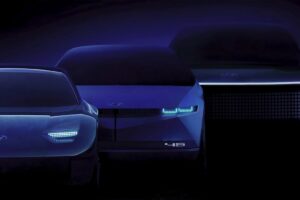 Hyundai has revealed plans to launch 11 new electric cars by 2030, with a further six EVs in the works from luxury-arm Genesis

Hyundai is ramping up its EV offensive. The firm has revealed plans to release 17 electric cars across its Hyundai and Genesis brands, in a bid to hold seven per cent of the global EV market share by the end of the decade. To achieve this, Hyundai aims to sell 1.87 million electric cars a year by 2030.

The Korean brand will expand its Ioniq electric line-up with 11 new models in the next eight years. These will follow the first model from the sub-brand, the Ioniq 5, which took Auto Express Car of the Year honours last year. An Ioniq 6 saloon will be next, and we’ve already spied the Tesla Model 3 rival in prototype form, ahead of release later this year. The production car will draw heavily from the striking Hyundai Prophecy concept car shown at Geneva in 2020.

Following that, a large electric SUV is in development, in the mould of the Hyundai SEVEN concept revealed at last year’s LA Auto Show. This will be called the Ioniq 7, and we expect the production car to closely align with the bold, imposing SEVEN concept. That car’s space-age ‘lounge style’ interior won’t make it to the final car, which could offer three-row seating when it arrives in 2024.

These new Ioniq models will utilise the 800V E-GMP architecture that underpins the Ioniq 5, but the brand is currently developing the next evolution of this platform. This new Integrated Modular Architecture, or IMA, will offer standardised chassis, battery and electric motor configurations, improving cost efficiency.

The new platform will also offer quicker charging, says Hyundai, and will likely underpin further Ioniq models until 2030. This could include a larger, Tesla Model S-rivalling saloon, an electric equivalent of the Tucson SUV and a Golf-sized EV hatchback. The brand could also introduce i10 and i20-sized models under the Ioniq banner.

Hyundai will also enter the performance-EV market with its N brand, which is already developing a hotter version of the Ioniq 5. We expect upcoming Ioniq models to receive the N treatment, too.

From 2025, every new model from Hyundai’s sister-brand Genesis will be electric, with six new EVs in the pipeline until 2030. The luxury marque has already launched the GV60, Electrified GV70 and Electrified G80 to form a trio of battery-powered models, and a further six electric cars are in the works. An Electrified GV80 SUV, along with EV versions of the G70 and G70 Shooting Brake, may form part of these plans.

These would be based on existing combustion-engined platforms, with future EVs utilising a bespoke architecture from Hyundai. A production version of the S-Class Coupe-rivalling Genesis X concept car could arrive on a dedicated electric platform as a halo car for the marque.

Check out the best electric cars on sale now…