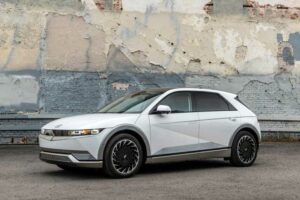 While plenty of new cars and concepts will debut at the New York International Auto Show this week, it’s also a time to learn about other car-related news and major announcements. Hyundai COO Jose Muñoz shared on Wednesday, April 13, 2022, that the automaker is planning to build a factory in the US for electric vehicle assembly and batteries.

The announcement couldn’t have been timed better since yesterday the Hyundai Ioniq 5 took home three awards that were announced at the show. It was not only the overall winner of the 2022 World Car of the Year award, but also the winner of the World Car Design award and the first-ever Best Electric Vehicle Award.

According to Automotive News, the newly announced factory is one piece of Hyundai’s $7.4 billion investment plans for the US. The plans include electric vehicle production in general, factory upgrades, and the future development of technologies related to smart mobility. COO Muñoz noted that the automaker is aiming to pick a location for the upcoming EV and battery factory later in 2022.

It’s also important to note that just a day prior to this announcement, Muñoz shared that Hyundai will produce the all-electric Genesis G70 and the Hyundai Santa Fe hybrid at its factory in Montgomery, Alabama. This means the Santa Fe hybrid, which also comes as a plug-in hybrid, will be the first electrified Hyundai vehicle produced in the States. It will go into production this October 2022, followed by the electric G70 before the end of the year.

Automotive News adds that producing the new Hyundai electrified vehicles in Alabama will require an investment of some $300 million. Muñoz said in an interview that the efforts will lead to 200 new jobs.