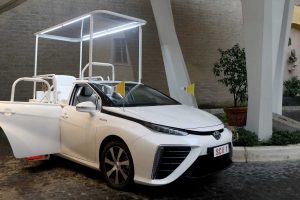 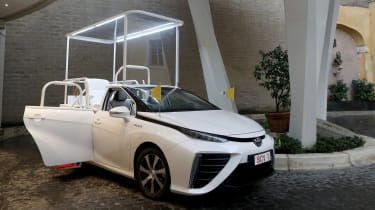 Toyota and the Catholic Bishops’ Conference of Japan have teamed up to provide his holiness, Pope Francis, with a new set of wheels.

The Vatican’s latest popemobile is based on the hydrogen-powered Toyota Mirai, which the papal state says will complement the Pope’s concerns about climate change.

Like every popemobile before it, this Toyota Mirai features a few tweaks to suit the Pope’s needs. Most noticeably, there’s a redesigned rear end with an elevated seat and safety cage, which allows the Pope’s followers to see him clearly during his public appearances.

There’s also an LED lighting system, a pair of Vatican diplomat flags for the front wings, a couple of gilded Vatican insignias and a convenience step mounted to the rear door sill, to allow the Pope easy access to the rear of his vehicle.

The Toyota Mirai is powered by a 153bhp electric motor, which is fed by a hydrogen-electric generator. The company says the powertrain provides a maximum range of around 310 miles – and, as the powertrain generates electricity by combining hydrogen with the ambient air, the only emissions leaving its tailpipe are water.

What do you make of the Pope’s new Toyota Mirai? Let us know in the comments section below…