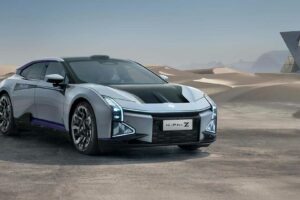 Chinese EV startup Human Horizons has revealed more details on its second product, the HiPhi Z electric GT, which it describes as an “ultra-futuristic digital GT.”

With the HiPhi Z, which was first shown in November 2021, Human Horizons says it’s out to redefine traditional grand tourers, as the EV “looks, feels, and drives like a car from 20 years in the future.”

Big words aside, the HiPhi Z will certainly not go unnoticed. It has a sleek shape with muscular surfaces, a narrow glasshouse and a wrap-around Star-Ring ISD light curtain consisting of 4,066 individual LEDs that can interact with passengers, drivers, and the world around it.

The doors are also smart and feature an ISD interactive system and ultra-wideband (UWB) wireless communication technology with 100-millimeter level positioning. This allows for automatic detection of people, keys, and other vehicles, enabling the doors to automatically adjust the timing and angle of their opening.

As for aerodynamics, the active air grille shutters (AGS) work together with the rear spoiler and wing to automatically adjust vehicle drag and reduce lift.

Inside, the HiPhi Z comes equipped with HiPhi Bot, an AI companion that can automatically adjust every aspect of the driving and passenger experience. Highlights also include a central screen that can rotate from a landscape to portrait orientation, two-spoke steering wheel, soft-touch Ultrasuede Bio Galaxy fabric, flowing ambient panel lights, 23-speaker Meridian audio system and racing-style bucket seats wrapped in vegan leather.

Under the skin, the HiPhi Z features a 120-kWh high-performance battery pack using Cell to Pack (CTP) technology that’s said to provide up to 705 kilometers (438 miles) of range on China’s CLTC cycle. The automaker did not offer details about the rest of the powertrain, but did say the HiPhi Z can accelerate from zero to 100 km/h (62 mph) in 3.8 seconds.

The HiPhi Z will cost between $89,000 and $129,000 in China, with official rollout dates to be announced at the Chengdu Auto Show in August.