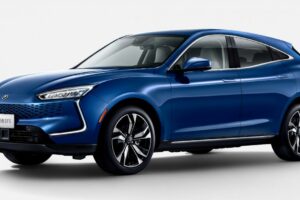 Huawei aims to have fully autonomous vehicle technology developed by 2025 as the consumer electronics and telecommunications equipment manufacturer works to diversify its business amid US sanctions, according to a Reuters report.

“Our team’s goal is to reach true driverless cars in 2025,” Huawei smart vehicle unit senior executive Wang Jun was quoted by the report as saying at a conference. The Chinese technology firm revealed its first vehicle, the Seres Huawei Smart Selection SF5 at Auto Shanghai in April this year, and this was developed in collaboration with California-based firm Seres.

Powered by a SEP200 asynchronous electric motor on the front axle and Huawei’s own DriveOne all-in-one electric drive system at the rear along with a 1.5 litre turbo four-cylinder range extender engine, total system output is 551 PS and 820 Nm of torque. Pure EV range is rated at 180 km on the NEDC cycle, though this is augmented by the range extender engine to 1,000 km.

The Seres SF5 uses Huawei’s Harmony OS-based HiCar system for its infotainment, which is the Chinese tech firm’s own take on connected ecosystems such as those offered by Apple and Google. This enables users to connect their smartphone to the car and have their preferences linked, as well as control their smart devices from the vehicle’s touchscreen.

Huawei made the change in direction towards developing smart electric vehicles following US sanctions that stifled its global smartphone business, according to the report, as the previous Trump administration deemed the Chinese tech firm a threat the US national security. Huawei denies the claim.

It is among the latest in a line of tech companies that have turned their attention towards self-driving vehicle technology, notably Apple which initially embarked upon Project Titan for a complete vehicle before changing direction towards developing autonomous car technology instead.

Meanwhile, China’s largest internet company, Baidu announced plans in January of a strategic partnership with Geely for the design and production of electric cars, with the joint venture set to release its first product in three years’ time. Baidu launched its fully driverless ride-hailing service in Beijing last month.