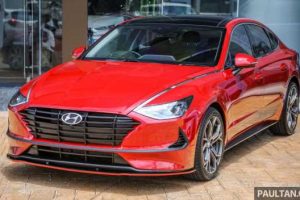 Now here’s something really eye-catching. Like it or not, this will get you the stares. Hyundai-Sime Darby Motors (HSDM) has introduced special editions of the eighth-generation DN8 Hyundai Sonata and the Grand Starex Executive Plus. Looking at the what we have here, SE might as well be for “sporty edition” (it’s not).

Let’s start with the MPV, which is dressed-up N-style. The inspiration is clearly the iMax N “Drift Bus” that Hyundai Australia created in 2019 for laughs. Like literally, as that one-off van started out as an April Fool’s joke. The links are clear – we have the Performance Blue paint, a bodykit with a red lip, and big 19-inch wheels with 245/45 tyres.

Compared to the “iMax N”, the Starex SE bodykit design is different, the rims aren’t the i30 N’s and there are no visible tail pipes, but it’s close enough for us to get the drift. No interior or mechanical changes, so it’s the familiar 2.5 litre turbodiesel with 170 PS and 441 Nm of torque from 2,000 to 2,250 rpm. Power is sent to the rear axle via a five-speed automatic.

Perhaps more striking is the Sonata SE, which you surely won’t miss in that shade of red. There’s a red lip, prominent side sills and a slim black tip on the integrated ducktail-style bootlid. The fins on the top of the tail lamps are a stock feature.

Completing the transformation are a blacked-out grille (Plasti Dip), 19-inch wheels that fill those arches perfectly (245/40 tyres) and black decals along the wheelbase with the “Geared for Distinction” wording. That’s Hyundai Malaysia’s own slogan. It’s a good thing that the dechrome job did not extend to the Sonata’s daylight opening, which is characteristically linked to the headlamps.

Like the Starex, this SE is just an exterior aesthetics exercise, and the 2.5L Smartstream MPI engine with 180 PS and 232 Nm remains. If you’re wondering, yes, there’s a Sonata N Line from the factory, but it would cost a fair bit as a CBU import.

Also the same are the prices, which are RM189,888 for the Sonata SE and RM163,888 for the Grand Starex Executive Plus, on-the-road excluding insurance, with sales tax exemption. This means that the SE package – worth RM8,000 for the sedan and RM15,000 for the MPV, HSDM says – is more or less a free perk, if you like the looks. If not, there’s always the regular cars. What do you think?