How to Check for a Battery Drawing Down on Old Jeeps 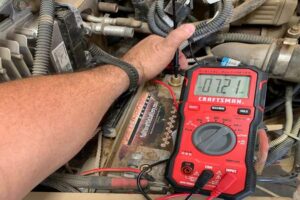 They both have the same stereo, Alpine head unit, equalizer, three amps, and six-speaker subwoofer system. If I let them sit for 10 days (due to the pandemic, I drive infrequently) the main battery in each will be dead. I used to be able to let these Jeeps sit for 30-plus days at a time without issue.

Related: Easy Electrical Upgrades For any 4×4

So here are my questions; first, I have not changed/modified anything in the past 5 years, why all of a sudden, are the batteries draining. Second, how do you check for a battery draw? Third, what’s the repair? I assume that is based on what the findings are. Looking forward to your response.

Four Wheeler’s Verne Simons answers: Great questions, Allan. The truth is I’m not sure how a draw would have developed in both Jeeps unless you somehow have a similar issue (like a frayed wire or bad switch) that went wonky in both Jeeps at about the same time. It’s possible that the head units both have a draw, but why would they both do the same thing suddenly.

Check for That Battery Drawing Down

To answer your second question, here is the procedure for finding a slow battery drawing—even a small one will cause the battery to die over 10 to 15 days or a month. The way to check for a battery drawing is by using a multimeter set to milliamps inline with the negative battery cable disconnected from the battery with the vehicle keyed off (on a fully charged starting battery).

If there is a draw, it will indicate on the multimeter (assuming the meter is working properly). We got between 36.16 milliamps on the Ultimate Adventure Long Range Jeep, and were able to pretty easily knock that down to 2.61 milliamps by disconnecting a few items. Once you’ve used the meter to establish that there is a draw, you’ll need to start pulling fuses or disconnecting electrical devices one at a time and then rechecking the draw to see where the power is going. We’ve run into aftermarket power ports with LED lights acting as a slow draw (ours pulled almost 30 milliamps on its own—not charging a thing!) as well as aftermarket radios, race radios, CBs, or Ham Radios acting as a draw. (Our race radio pulled 4.41 milliamps sitting idle.)

Another caveat to this is that more modern cars with a computer (or several) will be more likely to have multiple draws, either for CPU memory, radio memory, or just more potential draws with more complex electronics.

With your Jeeps and our Jeep, this is less likely since none of these should have body control modules, transmission modules, fuel injection computers, and so on.

Once you’ve established where the draw is, the issue could be with a bad relay, a bad switch, bad stepper motor, bad wiring (frayed wire or loose connection), a light that stays on when it should turn off, and more—so the fun has just begun. The simple solution is to isolate that circuit with a switch (maybe a ground interrupt switch), remove the fuse to that circuit when parked, or to just disconnect the battery when the rig sits for more than a week. The long-term solution is to tear into the cricut looking for the issue.

Battery Drawing Down on Old Jeeps: Step by Step