How Nissan’s oldest EV compares to its newest 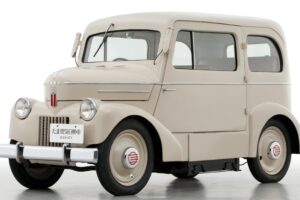 Nissan’s EV journey can be traced all the way back to 1947. Here’s how far things have come since then

While the first-generation Leaf was at the forefront of a huge push away from combustion engines for Nissan, the company’s electric-vehicle journey goes back far further than you might expect. What can be considered the first-ever Nissan EV was built in – believe it or not – 1947.

The car in question is the Tama Electric Vehicle. It was the work of the Tachikawa Aircraft Company, which would later become the Prince Motor Company before merging with Nissan in the 1960s. Named after the region of Japan in which it was built – near the capital of Tokyo – it was first developed in pick-up truck form, with a passenger version arriving later on.

An example of the latter was restored to its original spec in 2010, coinciding with the launch of the Leaf. Since then, the first-generation Leaf has been superseded by an all-new model, which now has a new sibling – the Ariya. So how does Nissan’s latest EV compare to its oldest? Let’s take a closer look.

The Tama has two packs of lead-acid batteries located under the floor in two compartments located at each side of the car. With each of these the manufacturer provided rollers to make it easier to switch out empty batteries for fully charged ones. Combined, the batteries provide 40 volts/162ah of electricity, which powers a single DC series-wound motor providing a modest 4.5bhp or 3.6kW.

The Ariya, by contrast, outputs 302bhp in its dual-motor format, or around 67 times the power of the Tama. The single motor’s output still dwarfs that of the Tama’s, at 214bhp or 239bhp depending on the battery size. The Ariya’s motors are ‘externally excited’ synchronous units; this means they use coils on the rotor rather than a magnet made from rare earth materials, as is the case with ‘permanently excited’ motors.

Feeding these motors is a lithium-ion battery pack. The chemistry inside li-ion batteries can take a higher current than lead acid, meaning they can be charged at a much faster rate. This kind of battery is also lighter and more efficient.

In the Tama’s day, packaging considerations were rather different. Crumple zones weren’t a thing, and there weren’t any bulky active safety features like airbags to accommodate. As a car that couldn’t go all that far on a single charge (we’ll get to that later), it also didn’t need to carry much in the way of luggage.

With that in mind, it should come as no surprise that the Tama is considerably smaller than the Ariya. The Tama EV is 3,200mm long, 1,270mm wide and 1,650 tall, with a wheelbase of 2,000mm. The Ariya is nearly a metre and a half longer, 580mm wider and has 775mm more car between the wheels. Interestingly, though, the height is about the same.

The Tama EV’s footprint fits comfortably within that of the smallest Nissans in the European range, and even fits into the dimensions of a modern Kei car with lots of room to spare. And yet, it does still provide seating for four.

The single-motor version will hit 0-62mph in as little as 7.6 seconds regardless of which battery is fitted, while in its dual-motor, e-4ORCE all-wheel-drive format the car does the same in just 5.7 seconds.

We don’t have a 0-62mph time for the Tama EV…because it can’t get to 62mph. Nor 30mph, for that matter; its top speed is just 22mph, while 19mph is the recommended speed to eke out as much range as possible. The Ariya, on the other hand, will keep going until 100mph in single-motor guise or 124mph when equipped with the dual motor e-4ORCE[2] powertrain.

The Tama could manage 40 miles on a single charge, which is hugely impressive for the time, and still plenty for many urban-dwelling drivers today. The Ariya, meanwhile, has a fully charged range from 247 to 329 miles, depending on the motor and battery combination[1].

The right car at the right time?

In the late 1940s, Japan had a shortage of oil, a problem for which cars like the Tama EV were presented as a solution. Fast-forward to today and the whole world is faced with significant environmental pressures which combustion-powered cars are contributing to.

The circumstances are very different, but once again, electric vehicles are playing their part. With zero tailpipe emissions, and the kind of fully charged range to suit all sorts of drivers, the Ariya is here to help make the switch a whole lot easier. Just like the Tama was all those decades ago, the Ariya is the right car at the right time.

[1]  WLTP figures shown are for comparability purposes. Actual real world driving results may vary depending on factors including the starting charge of the battery, accessories fitted after registration, weather conditions, driving styles and vehicle load.

[2] Always drive in line with the highway code and local speed limits.