Home » Car Reviews » How Much Range Would an EV Have to Offer You?

How Much Range Would an EV Have to Offer You? 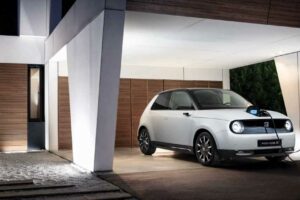 This month Mazda began selling its first mass-market EV stateside, with the debut of the MX-30 electric. The smallish EV—not quite a classic hatchback shape or an everyday crossover—offering seating for five and Mazda’s signature half doors, along with a sporty ride.

Needless to say, these numbers would have been fairly modern if not cutting-edge… about 10 years ago.

By this point we’ve all heard the defensive- and dismissive-sounding statistics from any number of automakers about Americans’ actual commutes, in the sense that a majority of commuters don’t have 50-mile commutes each way. The average distances reported over the past few years differ a bit depending on who you listen to, but they don’t really top 30 miles a day at the high end, with the US Census Bureau citing a figure of 27.6 miles. Other sources, which all have their own methodologies and survey samples, cite far more modest figures of about half that number.

The MX-30 is certainly not alone in the hundred-mile club, as the Mini Cooper SE Electric recently landed just north of that figure with a range of 114 miles. And not that long ago other EVs with less than a hundred miles of range were certainly more common, even though most have since left.

It’s worth noting that until 2019 Honda also had an EV with less than 100 miles of range, with the Clarity Electric offering all of 89 miles of range. The sedan was offered at a limited number of dealers in just a handful of states until Honda took it off the menu but kept the hydrogen fuel cell version of the Clarity on sale for another two years, withdrawing it just months ago. Needless to say, a lot of the decisions about both cars seemed strange to owners of other EVs at the time, and have not become more easily explainable since.

If the Clarity Electric proved anything, besides the fact that Honda may have staked hydrogen at the expense of EVs at the time, it’s that EV buyers on the west coast were not enthusiastic about EVs with under a hundred miles of range.

Even today it’s still difficult not to view lower-ranged EVs as really the second or third cars in a household, relegated to commuting and grocery-getting duties, while not completely replacing other, more flexible family cars. In that sense it’s a luxury of sorts—being able to insure and register multiple cars—one of which is largely useless for anything but commuting, while another is used by a spouse. Of course, some owners really have been able to switch to nothing but EV ownership, even using them for extended road trips and presenting them as being very practical in this regard. But it’s difficult to imagine the MX-30 or the Mini Cooper SE joining a household where they would be the owners’ only cars.

This brings us to our main question: How many miles of range on a full charge would an EV in any segment, sedan, truck or SUV, have to offer you for you to consider buying an EV? Let us know in the comments below.