Home » Car Reviews » How Much Horsepower Does A High Mileage Fox Body Make?

How Much Horsepower Does A High Mileage Fox Body Make? 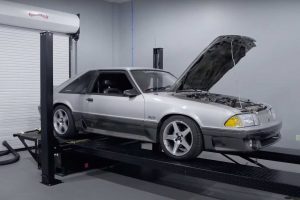 Where did all the ponies go?

The Fox Body Mustang debuted in 1979 with a production run that ran until 1993. This legendary vehicle brought the Ford Mustang into the modern age and saw massive changes in the Mustang’s design and appeal. Today, the Fox Body Mustang is an affordable collectible with low mileage examples seeing small growth in value while used Fox Bodies remain affordable. To see how healthy a high mileage Mustang really is, the team at LMR put their Fox Body Mustang on the dyno to see how much horsepower was lost over the years.

The subject Mustang in LMR’s video is a 1990 Fox Body Mustang GT with over 180,000 miles. This vehicle is used as LMR’s shop car and has not had the easiest life with multiple dyno runs and constant work performed for videos on LMR’s YouTube channel. In stock trim, the 1990 Mustang GT was rated at 225 horsepower (168 kW) and 300 ft-lb (410 Nm) of torque, which may seem laughable in today’s world of 740 horsepower Mustang GT500s but in the early 1990s, it was more than enough.

LMR’s dyno run shows that even after 180,000 miles of use and 20 years of constant use the Fox Body remains stout. The dyno run shows 223 horsepower (166 kW) and 295 lb-ft  (399Nm) of torque, which is right in line with Ford’s stock claim. The car used by LMR is not stock, and benefited from a more aggressive rear-end gear ratio of 3.73 when compared to the stock car’s 2.73 ratios as well as a freer-flowing exhaust.

The resulting dyno numbers are impressive for a car of this vintage with such high mileage and are a surprising result. The resilient V8 in the Fox Body Mustang GT can handle years of use and abuse and still put out the same power.