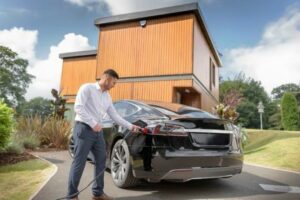 While the cost of gas and electricity continues to rocket for every household in the UK, one method of powering a house may not be well-known, but could save a good deal of money for owners of electric vehicles (EVs).

That’s because devices will soon be available that can store power in an EV’s battery and then divert the power back into the house, sometimes enough for 12 hours at once.

Already on sale in the US, the Dcbel R16 costs around £3,000 and uses solar power to charge up to two EVs at once.

Thanks to bi-directional charging, it can then send power from the car into a house.

And energy use can then be monitored through a smart phone app.

Currently, bi-directional charging is only available on the Nissan Leaf and the Mitsubishi Outlander plug-in model, however more manufacturers like VW will be launching compatible models.

The system means that essentially electricity is being recycled for more than one use, lowering costs.

The wall-unit can give an EV up to 60 miles of range in about an hour of charging.

It can be especially handy during a power cut as the Dcbel will automatically turn on if the main power is out.

It can produce enough power for devices around a home like microwaves, fridges and televisions to work perfectly for up to 12 hours on average.

Although currently only available in the US, the company will launch across the UK and Europe later this year.

Tesla meanwhile already has a similar system with its Powerwall, which is somewhat more expensive at £8,700.

It allows owners to store cheaper, solar-powered electricity for later use as well as powering an EV and home devices.

Currently there are around 400,000 pure electric cars on the UKs roads which could be used to store cheap, off-peak electricity.

Trials by Ovo Energy suggested that if a household did this it could save around £430 a year.

Even with just one percent of UK households running an EV at the moment, that is still 18GWh of stored power that could be drawn from.

That’s twice as much as the UK’s biggest storage plant in Snowdonia, which has 9GWh.

Energy prices in the UK are expected to rise some 50 percent this year to £2,000 a year on average.

This is due to gas and energy wholesale prices rising to unprecedented levels.

Stored gas supplies are historically low, and the UK is one of the world’s biggest consumers.