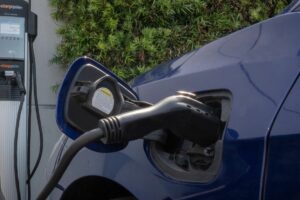 This week Honda has detailed its EV plans for the US market, a few years ahead of the arrival of its next electric vehicle—the Honda Prologue. The battery electric SUV is set to arrive on sale 2024 with the automaker indicating that it has set a sales target of 70,000 units for the new model, ahead of the arrival of others based on a platform to be developed by Honda, targeting 500,000 annual sales by 2030.

“Launching our first volume BEV in 2024 is the start of an exciting new direction for Honda,” said Dave Gardner, executive vice president of National Operations at American Honda Motor Co., Inc. “We are working with our dealers to plan the transition from sales of primarily gasoline-powered vehicles to selling 100-percent electric vehicles by 2040.”

However, even with the Prologue Honda is still planning to focus on so-called ZEV states: California, Florida, and Texas. The automaker says that it anticipates that the bulk of sales will come from these regions due to regulatory requirements and higher EV adoption rates.

More importantly for those who have been waiting to buy a Honda EV, the automaker goes as far as saying that initially the Prologue will be sold regionally, which means that it will be confined to just a few states.

“As EV infrastructure expands and customer interest grows nationwide, the company will rapidly expand sales and marketing efforts to other areas of the country,” Honda adds.

The automaker has also referenced recent efforts by the White House to largely confine EV incentives for consumers to union-made, American-made vehicles, efforts that Honda along with Toyota have pushed back against in recent weeks. Honda now appears to be partially hedging its EV plans for the US on wider availability of those incentives.

“As with other automakers, Honda’s initial zero emission vehicle sales goals of 40 percent by 2030 are contingent upon fair and equitable access to state and federal EV incentives intended to encourage American consumers to purchase electric vehicles,” the automaker said. “Honda has urged Congress to ensure that all vehicles made in America are treated equally.”

When it comes to the Prologue, Honda intends to rely on GM’s Ultium batteries and architecture to build the SUV, ahead of offering its own platform in the second half of the decade.

But with the Prologue being the sole electric vehicle on the way in the first half of the decade, Honda isn’t exactly cannonballing into the deep end of the EV pool. The automaker isn’t bringing its small electric hatch stateside, and still plans to rely on hybrids in the coming years with the Prologue launching in a limited number of states in 2024.

“We know customers who have a good experience with a hybrid vehicle are more likely to buy a battery electric vehicle in the future,” Gardner added. “Our strategy is focused on introducing a higher percentage of hybrids in core models in the near term, making a committed effort to achieve higher volume leading to the introduction of our Honda Prologue.”

Overall, the plans announced by the automaker can be characterized as cautious and conservative, while also mirroring its prior regional approach to selling EVs. If anything, Honda has been more bullish about hydrogen tech stateside, at least until this year.

Some of our readers may perhaps be surprised to learn that the Prologue will actually be the automaker’s third EV to be sold stateside, after the EV Plus of 1997 and the Clarity Electric that exited the US just a short time ago, in 2019. The Clarity Electric sedan was offered in Oregon and California for a relatively short period of time with a range of 80 miles that, incidentally, also points to reasons why Honda stopped selling it in the US. And earlier in 2021, Honda also stopped offering the Clarity hydrogen fuel cell sedan stateside.

By the time the Prologue arrives, the list of competitors in that segment will be quite long, including those from rivals Toyota and Nissan that are both due to arrive in weeks or months. On the other hand, there are also risks to offering too many EVs too early, and Honda clearly views its current timetable as being correct for its own goals. EV adoption inside and outside of California being where they are, perhaps Honda’s conservative approach is warranted.

Should Honda offer more EVs sooner, or is the demand just not there at the moment? Let us know in the comments below.