Home » Car Reviews » Honda's Sama-Sama Rewards – up to RM5k off in April – paultan.org

Honda's Sama-Sama Rewards – up to RM5k off in April – paultan.org 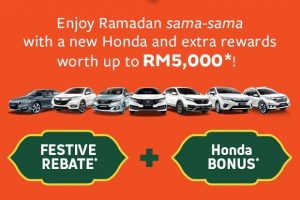 Honda Malaysia’s 1 Million Dreams March Special Rebate may be over now, but with a new month comes a new promotion. From now till April 30, HM will be having the “Sama-Sama Rewards” campaign offering up to RM5,000 of rebates, which consists of a “festive rebate” and a “Honda bonus”.

As for Honda’s smaller passenger cars, the volume-selling new City comes with a rebate of up to RM2,000 in April. That max rebate is for the mid-spec E, which seems to be the one getting the biggest promos. The base S and top V get RM1,000 off. The range-topping hybrid City RS e:HEV is not included in this sales campaign.

Elsewhere, the ever-popular Honda Civic is yours for RM1,000 off (all three variants), while the still-on-sale third-generation Jazz gets a RM1,500 discount for all three variants. The latter is an outgoing model, and with its B-segment hatchback slot set to be filled by the City Hatchback, this could be the last call for one of the most practical hatchbacks of its kind ever designed.

The government’s sales tax exemption for cars is in place till June 30, and Honda’s CKD locally assembled range get the full SST benefit.