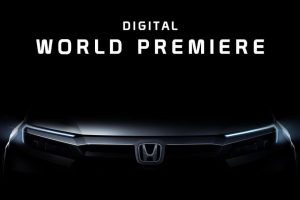 Honda Indonesia has released a teaser image on its Facebook page, announcing a digital world premiere that will happen on May 3, which is next Monday. The mystery vehicle in question has the upper section of its face on display, and it looks rather good.

Let’s take a closer look at the grille. It’s a sharp stare, with what appears to be slim LED headlamps framed by LED daytime running lamps in an inverted L shape. The chrome wing sits on top of the Honda logo, and it goes full width to the edge of the headlamps. This is a different style from the current thick chrome bar of the HR-V and the wing of the CR-V, which underlines the headlamps. In fact, this follows the style of the US-market Honda Passport SUV.

Moving out, the headlamps aren’t the absolute side borders of the face, as the front wings appear nicely swelled for a possibly nice stance. The bonnet has sharp lines that continue into the grille’s chrome bar. Not bad.

The current BR-V first surfaced in Indonesia six years ago

So, what could this be? Some Indonesian publications think it’s the next-generation Honda BR-V, and we think that’s very likely. What better place to give a three-row, seven-seat people carrier than Indonesia, where such MPVs (don’t be fooled by the SUV flavour, they’re all MPVs) dominate the roads and sales charts?

Today’s BR-V was first shown six years ago in Indonesia. Although the GIIAS 2015 showcar was billed a “prototype”, we know that for Honda, proto is usually 95% production. The actual production version came out a few months later in Thailand looking virtually identical, and sales started in 2016. The BR-V was given a midlife facelift in April 2019.

Honda’s original seven-seater MPV for the region is the Mobilio, which predates the BR-V. But with SUVs being the in-thing worldwide, it would be unsurprising if the more rugged-looking BR-V is now the main weapon for Honda in this segment. Local rivals of a similar concept include the Toyota Rush and Daihatsu Terios twins (which our Perodua Aruz is based upon), and the Mitsubishi Xpander. More on Monday.