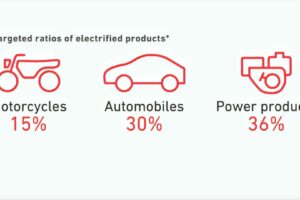 In June, 2022, Honda Group—which comprises all of Honda’s various entities as a global company—officially released the Honda Sustainability Report 2022. This new, 190-page report offers details both about what Honda’s been doing since its last sustainability report in 2021—and also where it’s going.

Since we’re RideApart, of course, our primary interest is in the motorcycle side of the business—and there are quite a few updates to Honda advancements we’ve been following over the past few years. First, though, we should talk about the biggest piece of news.

Remember Honda’s zero-emission plan for all its vehicles by 2040? To further that goal, Honda just announced a goal of having 15 percent of motorcycle sales, 30 percent of automobile sales, and 36 percent of its power products sales be electric by 2030.

As Honda itself notes elsewhere in this report, that’s something of a tall order. It’s already the end of June, 2022—and the percentage of electrified product sales in each of those categories for this year is fairly minimal.

When considering these rather small numbers, it’s important to keep a bit of context in mind. One, as of late June, 2022, Honda hasn’t been operating in the electric two-wheeler space for very long. That’s a fact that moto enthusiasts have long commented on. Of course, Honda isn’t the only legacy OEM to drag its feet on electrification—but it has definitely been a member of that pack, up until recently. Two, while Honda is a global company, not all its products are available in all places—and that’s especially true so far for its electrified products.

However, as Honda makes more electric products available in more places, to more people, it seems likely that more people will buy them if they have the opportunity. Obviously, factors like pricing, availability, and parts availability (as the world continues to grapple with supply chain issues) will also play their roles.

That brings us to another interesting piece of news that Honda revealed in this report. Remember Honda’s Mobile Power Packs? Those are the swappable batteries it’s using in its :e electric commercial scooter fleet, the Benly:e, Gyro:e, and Gyro Canopy:e (and why it’s not Benl:e and Canop:e, we’ll never know).

Back in June, 2021, Honda Motorcycle and Scooter India started testing the HMPP for use in electric rickshaws, as a potential swappable battery alternative. Currently, most rickshaws run on compressed natural gas, and the number of rickshaws operating in the country is estimated at over eight million. Since combustion-powered rickshaws are such a popular form of transportation, and India is is currently pursuing an aggressive electrification goal, the math supporting this move was pretty clear.

Fast-forward to June, 2022, and Honda announced that it is officially launching its own battery-sharing service for India’s electric rickshaws. If all goes according to plan, it should roll sometime in the first half of 2023. Full details about rollout plans haven’t been announced yet, but will surely be announced in the coming months. Honda also plans mass production of its battery packs for use in these rickshaws in India.

As another piece in Honda’s sustainability puzzle, the company gave a little more information about its Sensing 360 and Safe and Sound Technology plans. Honda occupies a fairly unique space, straddling both the motorcycle and car worlds. That’s why the company says it has a unique responsibility, and set its rather high goal of reducing traffic collision fatalities involving Honda vehicles to zero by the year 2050. (We’re still not at all sure that’s possible, because humans are gonna human, but it’s nice that Honda is trying.)

While Honda didn’t give specifics about Safe and Sound, it did talk a bit more about how it envisions all kinds of connected devices working together to communicate real-time information in traffic. If you use a lot of connected devices in your home, you may already live in a microcosm of the world that Honda is envisioning, where all the smart vehicles communicate with each other, with cameras, cell phones, and a wide range of electronic devices that are out in the streets every day.

Plenty of issues still need to be addressed here, not the least of which are potentially massive data mining and privacy concerns. However, Honda sees this kind of interwoven network of communication as the future of all its vehicles—including its motorbikes.

Honda also talks about an initiative it joined with other OEMs in Japan, as of October, 2004. These OEMs, along with participating motorcycle importers, began recycling end-of-life motorcycles at that time. Under the scheme, end-of-life motorcycles have been collected at dealers and at designated collection points, and then recycled, free of charge.

According to Honda’s report, a total of 1,359 Honda products were collected and recycled in 2022, which was about 66.2 percent of all bikes collected that year. When Honda and other OEMs began participating in this program in 2004, it was the first of its kind in the world—and it’s still not exactly a common practice in 2022.

Now, this is most definitely the work of Japan’s 2002 Law for the Recycling of End-of-Life Vehicles. That type of legislation isn’t exactly common in other places as of 2022. Still, development of similar programs elsewhere in the world—and particularly if a global player like Honda were to get involved—could help move the needle on properly disposing of vehicles that are no longer usable.