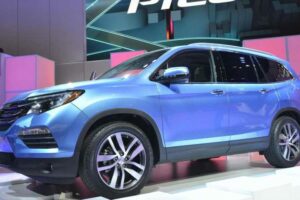 One of the fuel-saving features of the third-generation Honda Pilot is its stop/start function for the engine. It’s a feature that’s common on many vehicles from a range of automakers, designed to shut the engine down when temporarily stopped, as you would be at a traffic light. When it’s time to go, the automatic feature fires the engine back up. But for some late-model Pilots, that may not happen.

That’s the crux of a new investigation from the National Highway Traffic Safety Administration (NHTSA), focusing on an estimated 194,731 Pilots from the 2016 through 2020 model years. Thus far, 221 complaints have been reported to the Office of Defects Investigation (ODI) regarding the system.

The problem is that engines fail to restart after stopping, with some reports stating that a jump start was required to get the engine going again. The apparent issue is specific to the 3.5-liter V6 engine with the nine-speed automatic transmission. According to the NHTSA, there have been no reports of crashes, injuries, or deaths related to the issue.

ODI officials have met with Honda on several occasions regarding the issue. Between information from these complaints and other sources, the automaker has “found a correlation” between what customers are saying and the alleged system failures. As such, it seems Honda is aware of the situation. Moreover, the automaker indicated that other vehicles using the same engine/transmission combination are experiencing similar problems. That includes the Honda Odyssey as well as the Acura TLX and MDX.

The NHTSA is investigating the situation further to determine any possible safety issues that could arise from the failures. Some of the complaints include the engine shutting off prematurely at short stops, such as stop signs. Pumping brakes to get the system working is also mentioned, but sometimes the engine simply will not start. For now, there is no official recall from Honda.